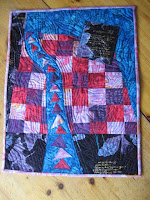 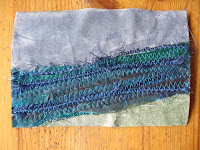 Someday, I will get better at blog post titles - so hard to think of anything interesting! Anyway, here's some of what I did today, in addition to running Sarah to the doctor's (hayfever, not asthma), taking a big load of stuff to the school for the fair, doing my online grocery shop, and so on.

I decided that the heavy dark piece of fabric at the bottom of the ALQS piece was really going to bother me, so I extended the geese down to the bottom of the quilt. I am happier now. Now I just need to get a label on it and get it in the post.

On the right is a prototype postcard for "R is for" - I have decided to do River. The card looks ok here, but looks MUCH better in person, as it uses lots of shiny bits of fabric and so on. The background is just plain cream fabric, which I added the bits of river to - shiny turquoise silk as the river bed, some blue wool roving, two colours of sheers, ribbon, and so on. When that was all couched down I used fabric paint (Stewart Gill MetaMica - my favourite kind of paints) to fill in the background. Obviously it needs edging and so on, but at least the basic idea is there.

I also did some postcards for the swap Here Comes the Sun - these, again, don't look as good in the photo as they do in person. I have used a hand-dyed fabric background, some orangey yellow wool roving and a piece of sheer fabric (peach coloured) on top, then done FMQ onto the sun - it's a simple card, but I think it works. 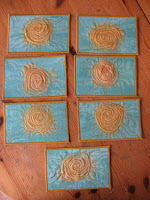 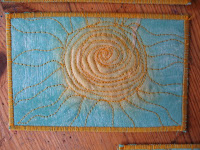 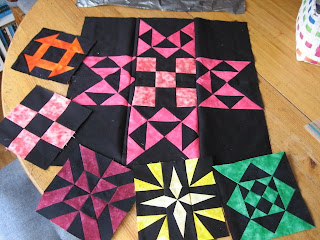 And in case you were worried that I didn't get any post, I did, don't panic! These lovely blocks all came from Diane, for the birthday block swap - there's an 18 inch block and 5x 6" blocks. Now Diane did technically owe me two blocks, as we were both in two groups, but she's really outdone herself here, don't you think? And there were some quitly notecards too, which seem to have escaped the photo.
And two more offerings - an "R is for" postcard from Jeannette ("roses") and some more block lotto blocks, these from Marilyn in Australia. Great green fabric, isn't it! 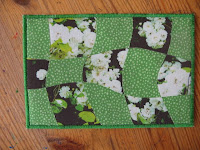 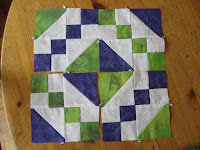 The extra flying gees blocks on your ALQS piece reall makes a difference! I love what you are doing for your river pc. MetaMica is one of my very favorite paints too.

I can't wait to see how you put all your black blocks together!

Kate, what is the name of the yellow pieced block? Not often a patchwork pattern grabs my attention.

Kate, your 'Here Comes the Sun' cards are wonderful! I really like them.

Wow...i cant believe all the goodies you get in the mail on any given day! What fun! Your bday blocks must be taking up a large portion of your house by now ;)
as for the ALQS quilt...i thought it was pretty before, but i do like the changes you made! Your rcvr is going to love it!
Now im off to work on mine~
cheers~
lisajo

In my next life I want to be your mailbox -- you get such fun goodies! Love the ALQS piece as well as the post cards :0).