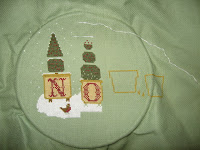 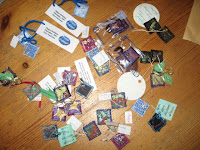 Well, remarkably enough, I have managed to survive my few days without internet access or a sewing machine, and come out of it more or less sane (or at least, no less sane than I started - about which starting point we will not comment!)

Thanks to not being at home and having tons of things to do, I not only read a book but also made major strides on this cross-stitch I received for my birthday - before the weekend, I had only done the four pot outlines, so you can see how much work I've done. Who knows, I might even finish it before I get tired of winter and Christmas!

I did come home to lots of nice post, though still not the missing postcard from Vicki (dang) - maybe tomorrow! I did, however, receive the other Christmas inchies from my swap with my surface embellishment group - not sure what I am going to do with them yet, at the moment, I think I will put them to the side and have a think about them. 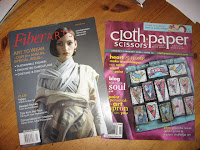 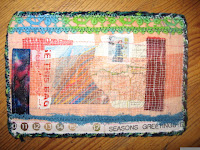 I also got two magazines (woo hoo) and this great card from Heather, which is for the reused swap on BQLPC - I won't go into detail about all the fun things she reused, but the list on the back was long and comprehensive. I do enjoy making those sorts of cards. Maybe when I have some free time (ha ha) I will do a series just for fun - or to swap here. 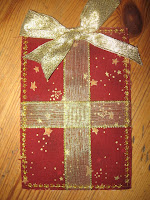 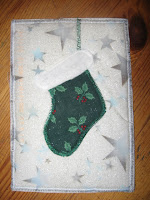 I did get two more of the postcards from my Christmas swap which hadn't yet arrived - both from down under - the present from Carole in New Zealand and the stocking from Christine in Australia. Both of them will get put away almost straight away, but that's ok, because of course they will come out next year, and for many subsequent years to adorn my house during December...

I have kept a handful of winter postcards out to put in my postcard wallhanging - I'll show those perhaps tomorrow - and then the plan is to pull out lots of favourites - we might make it a family exercise tonight, actually - to go up for a few months. Come spring, I might do a floral theme - I have a lot of spring florals lurking around...

Happy New Year everyone & keep on blogging!
Posted by Kate North at 5:36 pm

Labels: cross stitch and embroidery, little bits, look what i got, postcards received

Welcome back Kate and Happy New Year! Looks like you had a great postbag. I look forward to sharing more of your artistic journey in 2008.

Welcome Home Kate, Isn't it nice to come home to fun things in the mail and not have to take down decorations. Happy New Year!! Judi

Glad you're back. Great things in the mail as always. We haven't had any mail delivery since Dec 22, I'm hoping for a bumper lot of post when it finally resumes.

It is possible to go a few days without Interent, in fact it can be liberating at times.