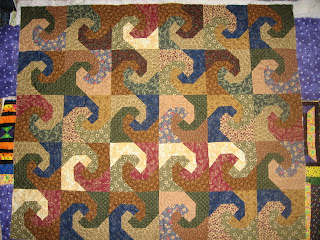 Well, I know I just showed this, but I decided that I should probably at least have a go at quilting some of the many tops I own (I've only showed a few so far - I will share more in upcoming weeks) and this one is pretty small, so it seemed a good place to start. And I'm very pleased with the results - I did a basic meander, with some snail's trail type curves thrown in here and there. It looks nice - from a distance, it just adds texture, but I've shown some closeups so you can see it really is quilted. 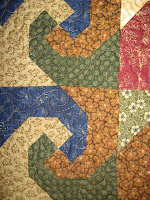 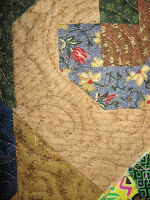 I used a brown variegated thread which works well, I think. Not too wacky, but not too subtle, either. And another fun thing about it is that I used recycled batting - a friend had quilted a large piece of multicoloured fabric (like a cheater panel - looks pieced, but isn't) to make a quilted "dreamcoat" for her 7YO son who is really into Joseph & The Amazing Technicolour Dreamcoat - once she had cut out the pieces for the coat, there were some fairly large oddly shaped strips left - these are what I used as batting (although there's extra fabric, because it isn't pieced, it quilted really easily). So, enviornmentally friendly as well!


Tomorrow I think Olivia and I will be making a pencil roll like the one Sarah made a while back - her friend G. admired it recently, and as she has a birthday coming up in the next few weeks, it seemed like a good present. I also bought a blank journal type book, which can have the front decorated. Useful presents, hoorah!
Posted by Kate North at 10:25 pm

That's a perfect quilting motif for that quilt!

Any one who can quilt like that has my admiration. Love the snails.

Oooh -- lovely work and it's perfect for the snails. I can't wait to see the photos of the "useful presents" -- I'm always on the look out for good gift giving ideas.

hi, just popping in as we're swap partners for lucy locket's valentine swap and i've been meaning to visit!, have had a look round your blog, and i noticed that as well as quilting, you sometimes do cross stitch (i used to design cross stitch for 'anchor' in my previous life!), and i also spotted you bought one of those needle felting tools (i bought a single needle felting needle in a holder last week to have a go too!), so i have a few ideas for the notions to send you now : )

all the best, and no doubt, we'll be in touch again soon, x.