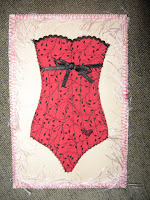 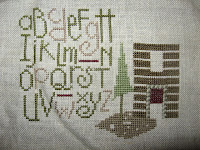 Uploaded these photos to the computer last night (I changed the date on this post to avoid confusing myself in future but in reality, am blogging on Saturday morning), but forgot to post about them - it's probably because I didn't really do much work yesterday, having spent most of it at school laminating reading words (ah, the exciting jobs we get to take on as parent helpers). Anyway, I received this card in the post from Sarah - it's for the Something starting with N swap and her theme is "Naughty but Nice", which I think is fun.

And, as I didn't do any sewing during the day, I thought it was time to show some progress on my cross-stitch - admittedly, not a huge amount of progress, but the alphabet is now joined by a tree, a patch of ground and the start of a building. Slowly but surely!

I won't get a lot done today, as we have a friend coming to lunch, and I have to make some sorbet this morning, but hopefully I'll at least get a chance to do my journal quilt for this week - I have not been very inspired this week to work on it (or much else) so it's been a bit of a slack week. Yeah, I know, it might not look like it, but for instance, yesterday I had about two hours between working at school and going to pick up the kids and I didn't do any sewing - just checked emails and stuff - in a normal week, I probably would have at least worked on finishing the postcards I'd started, etc. Might have more energy next week.
Posted by Kate North at 11:30 pm

Too bad life keeps getting in the way of sewing.

I hit a period after Christmas when I couldn't get excited about much of anything. Needless to say, no art to speak of got done (nor housework either, beyond the absolutely necessary). Just relax and take care of yourself. Your energy and inspiration will return in full force soon. Thanks for visiting my blog.