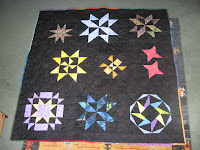 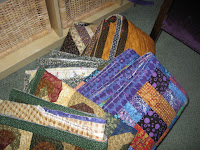 ...a pun in the title of this post, that is. Today, I spent most of my quilting time attaching binding to things. The quilt on the left is one one which I've been sewing the binding down - it's actually nto quite finished in the photo - there's about 8 inches left to do at the bottom right corner (it's finished now, though). This actually took ages to finish (i.e. three sessions, despite being fairly small, but this is because the back is a hand-dyed peice of fabric with a very tight weave, so it was a real ...um... challenge to stitch through. That's the polite word! It looks nice, though. Somewhere I have a photo of the back, I think, from when I quilted it... Ok, here we go - there's a photo of the back in my flickr album.

The other photo is a pile of quilts with binding attached which now need to be stitched down. One of these was already waiting - I actually quite like doing the hand-sewing on binding, I just haven't done much lately because of doing a lot of cross-stitch (I do hand-work while watching telly) and because now that I have a laptop, I often catch up on email during some telly watching. Though that's usually after I have done an hour or so of hand-work anyway, so it's not too much of a drain on my time. Anyway, there are four quilts in this pile -one is a Chinese coins scrap quilt which was done some time ago. One is the autumnal quilt with the apples from that same blog post, if you followed that last link... The other two are the recent snail's trail and batik small quilts. Believe it or not, I started on the binding for the big one (the apples) because I'd really like to get that quilt on my bed before it gets too warm to need it. It will take me a few days to do the binding, though, as it's a bed-sized quilt.

This was actually a perfect job to do today - making & attaching binding is fairly mindless - it requires a certain amount of precision, but not much thought - and this way I could not only rest my brain, which is not feeling very creative at the moment - but also multi-task by drilling Olivia on her times tables at the same time. Another activity requiring precision but no creativity! Told you it wouldn't take six months, Atet!
Posted by Kate North at 11:36 pm

You are "bound" to be happy with a few finishes! Well done!

Great finishes, especially the batik. I also enjoy sewing on the binding.

Good thing you like hand sewing down bindings. I don't like it at all. I can't seem to do it at night. I need lots of daylight to see what I'm doing.

I have a stack of my own that need handwork, but I don't seem to sit down in front of the TV much at all lately (which is when I usually do mine). I did get some done last night, but there is plenty left to go...

Good job on getting so much of yours done or in progress!

Nice quilts Kate. I love the green hand-dyed fabric on the back of the quilt you just finished binding. You said it was difficult material to quilt, wouldn't by any chance be fabric I'm familar with?

Hehehehe -- and see? I don't have to give you grief about it :0). As for me, I've been doing just about nothing so, you've been far busier than I have!