Back to school, back to work! 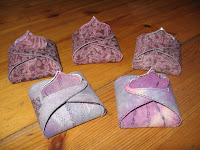 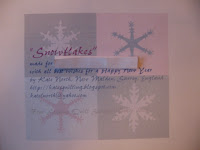 A lovely productive day today with the kids back to school, this despite a nagging headache for most of the day... First thing I did was finish the last box I needed for the swap with my surface embellishment group - those can go in the post tomorrow. (I had to put them under a heavy book today in order to get them flat enough to get in an envelope - the hazard of keeping them folded up is they do not want to lie flat!)
I also made a label for my snowflake quilt for the Four Season's quilt swap - and I even remembered to take a photo of it with something obscuring the name of who it's for. The label is actually slightly darker than the photo, but you get the general idea. 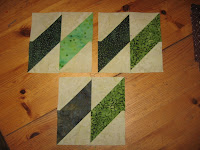 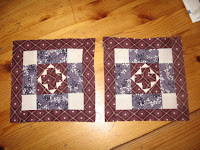 I also made a couple of things I had hanging over me - some blocks for a group quilt - three pieced leaves - I still have to do one appliqued leaf, but that will have to wait until tomorrow. And two Dear Jane blocks for my swap with Cathi - the middle is a tiny bit wonky, but on the whole, I'm quite pleased with them, especially as they are free pieced (not paper pieced) and the centre square is only 1 and an eighth inches - including the seam allowance. 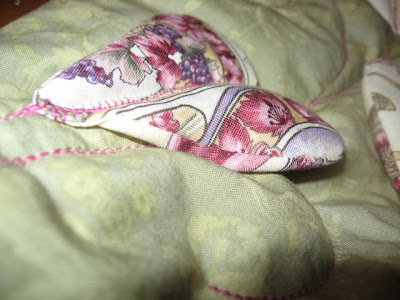 And the other thing I worked on - indeed, what took most of the time - was testing a bag pattern for the bag challenge on BQL - the February bag. As the bag is not public yet (what with it not being February and all) I'll only offer this little sneaky peak here - and will try to remember to share the whole thing with you when it actually gets to be February...
Posted by Kate North at 9:32 pm

For a person with a headache, you got an amazing amount of stuff done.

I really like the fabric boxes, whoever gets one will be very pleased.

My boxes didn't want to lay flat either after folding them I ended up steaming them.
WOW only 1 1/8 that is small but they turned out nice also nice label and love the purse. Judi

The fabric boxes are lovely kate and really liked the little heart ornaments on your last post. Beautiful things!

Glad you're back, definitely missed your energy and creativity!! love the valentine ornaments super cute..