A miscellany of Thursday 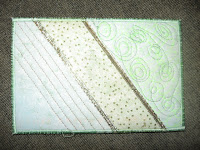 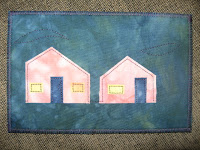 No work of my own to show today (well, I might share a few more tops a bit later - Lynda asked how many tops I had - I not entirely sure I want to admit it, but I think it's somewhere between one and two dozen) but I got these two lovely postcards, the metallic one on the left from Barbara, and of coure, being metallic, it didn't photograph well, but it's very pretty nonetheless. The houses on the right are from Francoise - I like these little house cards - they are great fun. 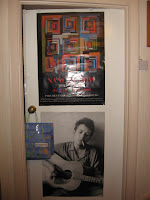 I also got this today - not the Dylan poster, which I've had for a while, but the Nancy Crow poster. My friend Brenda, who invited me to join her newly reformed quilt group, which is meeting on Thursday mornings, every other week, was having a clear out in her house, and knowing that I'm a Nancy Crow fan, passed the poster along to me.

The quilt group was fun - it's a small one, five people today and I think maybe seven if everyone comes, but that's fine - a good size for meeting in someone's house for a few hours. It's always nice to have some new people to chat with and do show and tell. We are going to make a group quilt using nine-patches and hourglass blocks - it will be a nice little project to work on together; I'm looking forward to it. All of the other women in the group are older than I am (some of them considerably) but that's ok, too, I'm used to being the baby in quilty things... 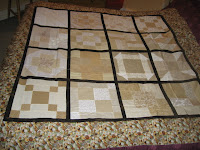 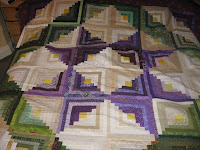 So, having admitted to owning lots of unquilted tops, I guess I'll show a few more of them - here are two, also both from swaps. The left-hand one is from a swap called Antique Neutrals - all the colours used had to be neutrals. Very effective, I think. The other was (you may have guessed) a log cabin swap. I liked this layout with the central star. This quilt might actually get quilted sometime soon by my friend Lana - it's fairly big, and it wants an all-over pattern, so it makes sense to longarm quilt it.
Posted by Kate North at 10:13 pm

These two quilts need to be OUT of your closet or wherever! Both are just gorgeous!

It would be fun to be in a small quilting group like that. We'd call it a guild here.

Love my small quilting group! As you know, they are a wild bunch of women!

Think I've seen that Dylan poster before!! Wonder if he is still on his permanent tour and coming back for a concert!?

Oh -- I would love a small sewing circle that size! And the neutral top? It does work -- very well.

Nice quilt tops. Having someone else quilt them sounds good to me :)

Hi Kate, love the log cabin top. I'm a member of Richmond and Kew Quilters which is quite a big group - a small one would be good sometimes!
Avril in Twickenham

I love the antique neutral quilt and the black sashing really makes it pop.

I saw Dylan at a Bruce Springsteen concert about 5 years ago. He was a walk on guest. My hubby and I were in the "pit" right up front and I could have reached out and touched him. His voice is not what it used to be but it was a real thrill. Bruce and Dylan on the same night! I have his latest CD which is quite good.

I like the purple and cream log cabin quilt. It would make a good Quilt of Valor quilt coz it reminds of a purple star. I may make one myself.