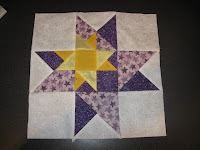 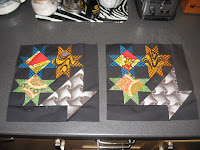 Well, Olivia was still not completely well today (though she is better, thanks), so once again, plans I had to go out (today was just some errand running) were shelved, and I spent the day sewing, mostly. She spent most of the day watching DVDs. Luckily, because it's just a bad cold, sore throat, temperature, she doesn't really want me to do anything much, which leaves me free to just check on her periodically, sit and watch for a little while, and otherwise, just get on with what I wanted to do. So I decided to get ahead of the game and do some (or all, as it happens) of the February blocks for the block lotto. I started with a purple & yellow star for Sherry - this is the same star from last month as I liked it so much then. Then I saw these baskets in the same book the star is from (Judy Martin's block book) and decided to try them out in African fabrics, as I still owed Karol Ann another block (not anymore, ha ha - your turn now KA). I'm really pleased with them - wasn't sure how well they would work as African fabrics are all very bright and busy, but I think they've come out well. 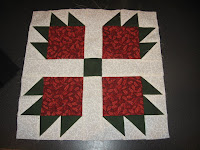 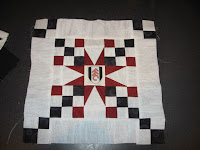 Then, more birthday block swap blocks - on the left is a block for Sophie - the bear claw points are green, not black, the light isn't great. And on the right, a block (where I have just noticed I put the top panel on the wrong way around - I'll change it tomorrow) for Angelina, who wanted us to do a block using the colours of our local NFL team or fabric with the team logo, etc. As I have no local NFL team, she said a local Premiership soccer team was fine, so I have picked Fulham, which doesn't play particularly near me, but the training ground is just down the road - less than half a mile. They sponsor football training at our school, too, and anyway, I like the colours, which are black, red and white. I have used t-shirt transfer paper to put the logo in the centre of the block.

What a productive day, even for me!

Oh, just remembered I had a postcard in the post - forgot to take a photo, so I will show it tomorrow...
Posted by Kate North at 5:40 pm

I love the purple and Yellow block. Nifty! is that a well known block? I've never seen it. and the African baskets are great, nice twist on an old block. Hope olivia is better soon!

Yes...please do tell where you got the pattern for the star in a star block. I love it!!! Would love to get the pattern.

a productive day indeed. im trying to work on my February bday block too...not sure what design yet, as i plan to work around the football logo...and its an unusual size, so i may just have to work a checkerboard around it. Any suggestions?

You've gotten so much done! LOVE the african blocks, actually I love all the blocks, but especially the african ones. 'scuse capitalisation, one handed typing while child is feeding...

Gorgeous blocks, Kate. I haven't the patience for quilting that requires all the edges and corners to line up, so I admire your ability. I've posted photos of some of my fabric stash on my blog, but I use mine in quite different ways. I hope Olivia is lots better today.