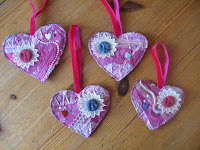 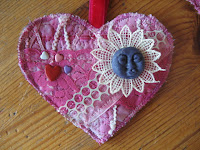 Today was the last day of the kids' holiday before going back to school tomorrow, and they decided to spend it in their favourite manner - lounging around, playing odd role-play games, watching telly, playing on the computer and fighting with each other (well, 4 out of five ain't bad!). Which meant, you guessed it, sewing time for Mummy. WooHoo.

One thing I did was some Valentine's ornaments for the swap on Creative Swaps - these aren't due until the 2nd of Feb, but given the slowness of the post these days, I thought, why take chances. I started with a bit of tie-dyed fabric (the rest of the FQ I used on the 60s postcards below) which I quilted heavily with circles and loops in a variegated pink thread. I then couched on some pink yarns. All that, I did while the piece was still one large piece - I then cut out the hearts, added some ribbon, beads, sequin waste, lace, or whatever. Some heart shaped brads, a lace flower, a little face and there you go. I forgot to take a photo of the back, but what I did was add another piece of batting, and a double layer of sheer fabric and stitch around the edge. Then I put a heart shaped piece of paper with my name and details on it and some heart shaped sequins between the sheer fabric and a layer of multi-coloured mesh and satin stitched the edges. I didn't want to really do anything elaborate on the back, but I did want the back to be attractive... Anyway, I think they turned out well - I sort of wish I'd made an extra for myself, but that's ok, I have the photos! 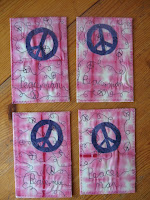 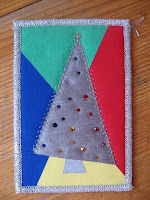 The other thing I did today was the postcards for the 1960s swap - which means I am all caught up with my postcard swaps (until the 15th of January anyway!) . I was writing out a list of various things I have committed to in the early months of 2008, and I actually feel a bit better now, because it's not as many things as I thought it was - and there is a wide variety of stuff, too, which is always more fun. I have very few PC swaps on at the moment, but that's ok - I'm sure I will do at least one or two a month, just not quite so many as last year.

Anyway, all I did with the 60s PCs was to take some tie-dyed fabric, add a peace symbol and quilt peace symbols and the words "Peace, man" onto them. Simple, but definitely 60s!

And finally - last but by no means least, my postcard from Vicki has FINALLY arrived - only took nearly a month to get here (it's postmarked in Virginia on the 4th of December). I'm just glad it's not lost because I really like it. (I knew I would when I saw it on her blog.)
Posted by Kate North at 8:18 pm

I love your peace cards and I am so glad that the tree finally arrived. I see it lost one of it's crystals but otherwise looks no worse for the long trip!

Vicki sent me one of her silver tree cards also and truly the pic does not do it justice. She is very creative and great with her cards. I proudly have hers on display in the same book that I have yours, too.

You are so talented. great idea for the heart ornaments. Judi

The little hearts are very very cute. The peace symbols sure take me back to the sixties. I'd hate to say how old I was then. Lol.

I love these hearts Kate and the Peace cards are groovy! Showing my age! lol

The heart ornaments are beautiful Kate.