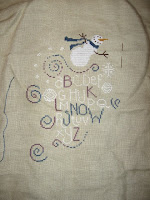 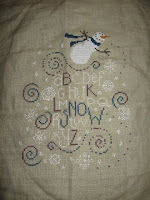 Today I spent most of the day putting away Christmas decorations, cleaning house and changing around the various ornaments (pottery, etc) I have dotted around the house. It's a New Year's tradition here. I always like to change my stuff around - partly this is because I have too much stuff to keep it all on display all the time and partly because I think if you keep things in the same place all the time, after a while, your eye goes right by them and you don't really see them anymore. I really enjoy this as everything looks fresh and new and I get to see some of my stuff which has been put away for a year - and so on. I also really like the whole putting-away-the-Christmas-decorations stuff because it makes the house seem so much bigger. There's a kids' story by Julia Donaldson called A Squash and a Squeeze which is like this - an old woman complains that her house is tiny, so a wise old man advisers her to take in her cow. And then her various other animals. Then, when she has all 6 or so animals inside, he advises her to kick them all out - and suddenly, her house seems really big!

Anyway, no sewing today, but here's the promised cross-stitch update (yeah, I know, I'm no longer doing these on a regular day - so what! - seriously, though, I'll probably get back to posting it on a set day at some point). The snowman is finished - it's not framed (or even pressed, as you can tell) yet, but it's done.

And I've begun the little winter house sampler (centre below). It's back to the birds next, but I still felt wintery (though not Christmassy), so I decided to work on this for a while. The sharp-eyed among you will notice that the actual stitchery is backwards from the view on front of the pattern. My guess is the photo got reversed... But it doesn't really matter, frankly. The plan is do finish this one, do a couple of squares on the birds, do the little Valentine's heart, maybe a few more birds, and then Cathi's little sampler (the "pair of socks" one). 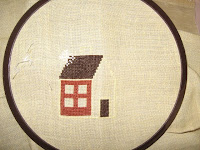 I do love those Bent Creek patterns - my favorite and your snowman is lovely. If the patterns need a home once you are finished with them I would love to work out a trade. :o)

Your finished snowman looks wonderful and youve made such great progress on the house already too!