Everything is all yellow... 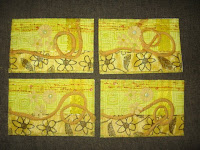 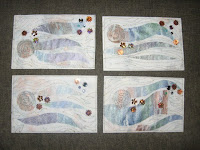 In my couple of free hours this morning, I finished up the Y is for (Yellow) postcards, and also used the bondaweb I painted the other day on some postcards for that swap - the swishy shapes are done with painted bondaweb. I have to say, I really like this effect and it's definitely a technique I will use again. I would make a great background. And astonishingly, I managed to do FMQ on these cards with metallic thread through the bondaweb, with a minimum of breakage. 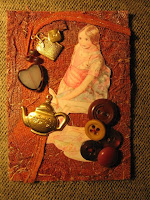 The other thing I did today was make a start on my ATCs for an Alice in Wonderland themed swap (we have to use Alice sheets from Alpha Stamps - there are some great ones to choose from, though - I bought several!)
I used a background which was a scrap from a piece I had created before - the colour doesn't show well here, but I will photograph again later so you can see it better. These ATCs will be fairly different from one another, I think - I have to make 9 to swap and I intend to do them one at a time rather than all together, so there will probably be more variation than I normally have in my ATCs, when I do a group. I had originally intended to use the same background for all of them, but I'm thinking I won't - I'll dig into my stock of prepared backgrounds and see where each piece takes me. Anyway, here's Alice at the tea party.
Posted by Kate North at 7:43 pm

I think the bodnaweb cards are brilliant. Hadn't thought about cutting after painting - I've always just FMEd all over. Must try it

I love those yellow cards!

The yellow cards are so pretty. Alice's tea party is sweet too. Great ideas!

The painted Bondaweb looks really fab on those cards, very effective. I've painted Bondaweb before (I've used this as a layer when needlefelting under some organza). Really like the way it crinkles up when painted.