OK, we're getting near the end now. This last set of stuff is stuff which is partly done or nearly done or a little bit done or... Some of it is very near completion (by which I mean, a completed top), some much less so. 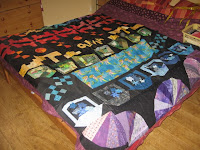 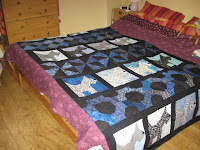 1. Rainbow Olivia quilt. A nesting robin quilt, again from Scrap Quilting Forum. You can't really see this in the photo, but I started with a row of stars (you can see that better here) and the idea was then to do a row in each colour, using whatever the instruction was for that month - so we have a row of red blocks, then orange is curves and circles, yellow was a piano key border, I think, green was crazy piecing, aqua was nine patches, blue was basket blocks, purple was fans, and pink - well, pink hasn't quite ever happened. Just one more row to go, but, it stalled. It's been stalled for a long time now. Like since summer 2007. Really should do a pink row, shouldn't I! Maybe I'll aim to get it done for her birthday (October).

2. Scottie Dog quilt. The Scottie Dogs were from the block lotto - my first win, in June 2006. This quilt is again, almost done. The problem is, it's too narrow. So I need to put a strip of black down each side. You'd think this would be easy, right? It should be. Heck, I'm going to go off right now and add it to my list of February goals. (Not quilting it, just getting those black strips on). I intended this as a bed quilt for Sarah - perhaps I'll try to aim for her birthday (Sept) or Christmas for this one. It really shouldn't be this stalled! 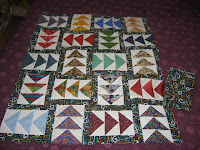 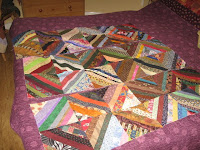 3. This little quilt made from flying geese (from a swap) is almost a completed top - just needs a border around it with the material used along the side of the geese. Another thing which really has no excuse for not being more finished.

4. String blocks - these are the ones from all the strings I had, which I am keeping for myself. I used some for a quilt for my friend Cathi as a housewarming gift, I sent quite a few to Lisa, but these are mine. There are two more seams needed to make this into a top, then it needs quilting. 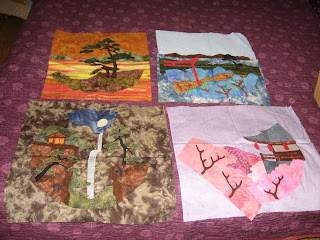 5. Japanese block of the month. We won't go into which year this block of the month was supposed to be for (apparently, it ran from May-November of 2005). There were nine blocks, then fabric to join them together - the actual blocks are circular designs - you can sort of tell that here. I love the ones I've done (machine applique) but they are time consuming, and I tend to get sidetracked. Actually, it's not the applique part I find the most time-consuming, but the preparation of the pieces. That said, I do have the pieces for block 5 ready to go - I should start it. 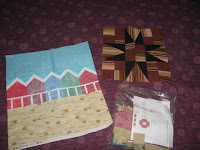 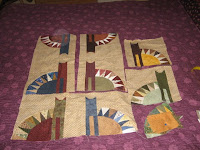 6 & 7. Summer Beach House quiltlet. An idea, started it, haven't got around to working on it more. It's in the back of my mind. Also, a bag of pieces cut to make batik goshen stars with taupe backgrounds. Not sure I will ever get to this. I made some for a block lotto ages ago (Sept 2006), really liked the colourway and so cut some more for myself. But...

8. Sawtooth cats. This quilt is supposed going to be for my mother's spare room. If I ever finish it. There are 20 cats, of which I have done 8, one is partly assembled, and I have another one downstairs waiting for me to do the hand-piecing part of it. I like this quilt, but somehow, I lose interest easily. Probably because I have to think about it.

And finally, these two sets of blocks aren't really unfinished in the same way - both of these are ongoing private swaps which are still in progress. But I thought I should show them.

The African blocks (12") are a swap with Karol-Ann, and we have just switched to six inch blocks (after I took this photo, I found one more 12" block which had escaped) to give some other options. I'm not sure if this is one quilt or two, but at some point it will become at least one! 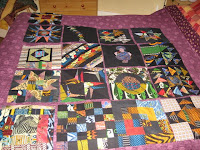 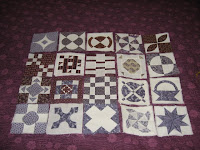 The Dear Jane blocks are a private swap with Cathi - these are 6" blocks, so although we have done a good handful, we can accomodate quite a few more before stopping.

And that's it. It's enough - more than enough - I know. But I'm sure it's not any more than a number of you out there have lurking around. Go on, confess, how many tops do you have tucked away waiting to be quilted? This isn't really the same as the number of projects I am working on at once, of course - although I usually have a handful of things going on at the same time, that's not usually more than 5 or 6 different things (not all quilts) - most of these projects (especially the block sets and finished tops) just sit there waiting - they aren't actively being worked on!

OK, enough blogging. Maybe tomorrow what I show will involve actual work, rather than lack of work, like today's posts - although I did pin baste two quilts today, which has to count for something!
Posted by Kate North at 10:51 pm

You most definitely need to finish the scottie quilt! Got your work cut out for yourself but I'm sure that like the rest of us you will add more to the list as the year goes on.

I salute you for sharing your list. When packing up several boxes, now labeled "studio projects" for my move, I became awake, once again, of just how many works in progress I have on MY list . . .

So much!! It's really something to see all those at once -- quite a variety of styles. Your African blocks are really fun.

Wow...i cant believe how many quilt tops you have completed! of course, that is usually the stage i stall out on :)
kudos to you for taking the time to share with us in your last four posts...i thought i had several things stacking up, but your collection blows mine away ;) Its an awesome collection though, and great to be able to pick and choose...i get bored easy, and often need to switch from project to project...so you have a nice variety to work with.
Perhaps i need to consider a similar step to get my projects organized and finished...thanks for sharing Kate! :)

Wow! Kate - you certainly have enough different things floating about to play with a different project each day for the next month and still have some to go on - I'm glad it's not just me who part completes things and then moves onto something else. But the good thing is none of them cost anything to feed and they do provide good house insulation especially in this cold weather :o)

I'm not confessing how many I have because I honestly don't know and physically couldn't move boxes etc to find out, but it's a fair few too!

I do owe you an African block, but am on 'sick leave' at the moment :-)

This makes me feel a lot better! LOL

I have that cat pattern - I haven't even gathered up my nerves enough to start it!