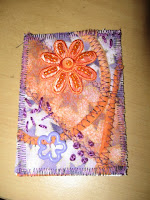 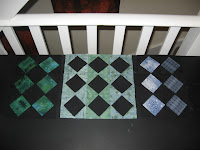 Had a trip to one of my LQS this morning (see below for booty) - and also to pick up a few more presents for my birthday boy (6 on Thursday - tough to believe) and this afternoon I spent some time sewing, thank goodness. Finished piecing the top for the Triptych piece for the Flickr group - I think I will quilt all three sections at the same time, so that the quilting is continuous, but I will then cut them apart and bind them separately. The central panel is 12" square, the other two are 8x12. Simple, but it works.


I also did this little ATC to start the February challenge on Textile Challenges - we were to grab an ATC base, and the first five ingredients we saw and make an ATC. I grabbed a piece of purple fabric, a dryer sheet & Markal paint stick (I counted that as one, as the paintsticks and dryer sheets were sitting together waiting for me to colour some), the orange flower, some flower brads (used the purple one) and a skein of thick purple thread. The back is orange and purple as well, but that didn't have to count as one of the five things. We weren't supposed to take more than 15 minutes (i.e. it's an exercise in not over-thinking things), though I admit to taking closer to 20 - for one thing, the hand-stitching took a while as the thread was very thick and hard to pull through the base. Also, I had to iron the dryer sheet dry (between paper) one I'd paint-sticked it.


And the main work today, I can't show, as it's my Exquisite Corpse - pretty much finished my head, though I have yet to attach the words to the section - need to double check how many as well as have a think about which ones (we are supposed to put some words on each section so it forms a sentence at the end. It's something like - hang on, I'll check - ok, it's "The adjective/ noun adverb/ verb the /adjective /noun") - so I will need to put "The [adjective]" in my square somewhere. Which is good, as I know what adjective. Whew. 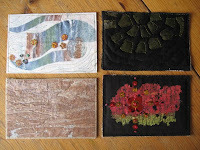 These postcards arrived yesterday - they are the results of the painted bondaweb swap - four very different cards, but all nice. They are mine (upper left), Wil's (UR), Tracy's (LL) and Celia's (LR).
I also received my monthly fabric fix - purple theme this month, which is handy, as I happened to notice the other day I had very little purple.
And then there's the booty from the LQS - the batting for the pineapple quilt - which I still can't baste because having basted two baby quilts the other day, I don't have enough safety pins until at least one of them is quilted. But at least I have the batting now. I also picked up the orange fabric to send to Anne for the celtic knotwork on the Ostrich, though I forgot the thread - however, I should be able to get something at my local haberdashery department. I also got a metre of mustard yellow polka-dot fabric, which fulfills two different needs (plus it was in the sale section), a green fat quarter for my FQ swap partner and a replacement 8.5" square ruler as mine has a broken corner - it broke some time ago, and I superglued it back together. It's now broken again and frankly, doesn't seem to want to hold with superglue any more, so I decided I should just buy a new one. It's my favourite size, so it gets a lot of use. Also picked up two patterns in the sale bin (50p each) - one for pincushions and other bits shaped like buttons, the other for penguin Christmas ornaments. Successful shopping, despite the thread! 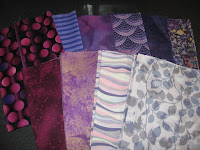 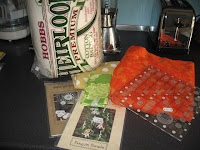 Labels: atcs, exquisite corpse, look what i got, mini quilts

The North Sea Triangle has obviously struck in reverse this time as there is no sign of mine!