Mongolian Knot and others 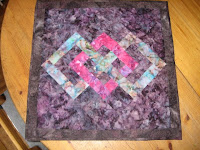 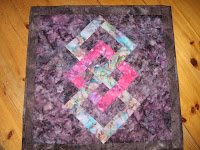 Here's something I got in the post today (or rather, it came earlier in the week, but I collected it today as it needed a signature). This little quilt (about 20" square or a little larger & called a Mongolian Knot) came from Ann in France, who offered it as a swap in lieu of postage when I sent her some blocks I was clearing out - I had seen the top before in another context and admired it, so she knew I'd like it. Of course I said yes! I've shown two views as I'm not sure which way is up - neither was Ann, apparently, as she put hanging corners in all four corners! At the moment, it's hanging vertically. That may change, you never know... 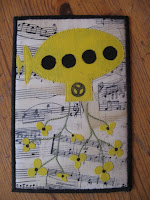 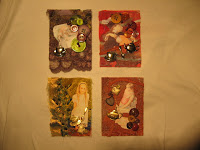 I also got this "Something starting with Y" postcard from Jeanette in the Netherlands - I love this card, it's really clever and well executed.

And finally, I did do some work today before I proceeded to spend the entire rest of the day running stupid (and frequently futile) errands - I did three more ATCs for the Alice in Wonderland themed swap. These are all still tea-party themed, though some of the others may not be. But I do have these teapot/teacup/teabag charms, so I might as well use them. This photo was taken against a white background, so you can imagine what the true colours are based on that (and yes, it shows the one I did the other day, which I have already shown you). All of these are done with backgrounds from my recycling box - bits and pieces of other projects which were either surplus to requirement or unsuccessful and put aside for reuse. A few are from technique swaps, where the piece I received wasn't a finished work, but just the results of someone playing with a technique.
Posted by Kate North at 11:38 pm

Labels: atcs, look what i got, mini quilts, postcards received

That Mongolian Knot quilt is fascinating and she used good colors in it, too.

The Mongolian Knot is very interesting and I'd say you made a good exchange! The yellow submarine card is really creative!

Glad you like it Kate! You're right about not knowing 'which way is up' so I thought I'd take the cowardly option :-).....Luv AJ