The last quilting of the year... 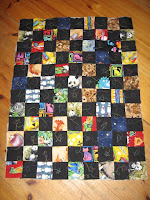 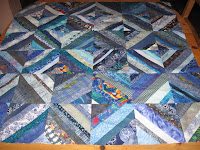 Well, here's two things accomplished today - finished the last of the string blocks and put them together into a top - this will wait until later in the year to finish - I want to get some fleece to back it with (and not put batting in) as it is quite heavy already, with the foundation layer under the strings. I might be able to find some at the fabric sale at Farnham Maltings, which I think is the 11th of January.
Most of the sewing time today was spent helping Alex make something with some of his fabric. This is 18x24" as is for some of his stuffed toys to sleep under. Just what everyone needs, right? He did some of the work - he chose the fabric (the black was my idea - I thought it would be a bit too busy otherwise), I cut, he counted squares, we both sewed (he ran the pedal), he snipped the pieces apart and I ironed. Later, we both pinned and then I quilted it quickly with a stars and loops meander. I still have to bind it - I originally thought I might do a pillowcase finish, but I wanted to use lots of small batting scraps, so that didn't seem too practical. Anyway, I don't mind binding - I'll get it attached on Friday and sewn down shortly after.
Tomorrow will be a non-sewing day (though I might post my cross-stitch progress) as traditionally I take down my Christmas decorations, clean house and move pottery & knick-knacks around on New Year's Day. A fresh start to the new year...
Thanks for being here in 2008 - hope to see you all in 2009!

Happy New Year! These projects are great endings to 2008.

Aaww! Alex's quilt is too cute! I recognise some of his dog fabric ;-)

Hey Kate! Hope you have a very productive 2009 too! I look forward to watching your creative journey!
Carole

The toys quilt is looking good, and what a lovely thing to make with a child! Happy New Year to you and your family!