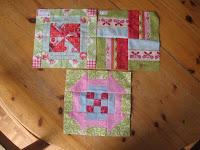 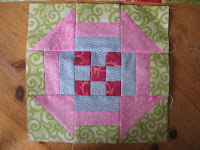 I did lots of sewing today - had an early start as Sarah had to be somewhere by around 9am, so we dropped her off, swung by the supermarket for a few things (and a coffee in Starbucks) and then headed home to do...very little. Well, 3 loads of wash, some tidying up around the house and lots of sewing, while Olivia and Alex watched a film and played on the computer. Ah, bliss.

First thing I did was do some more quilting on the corn an beans. It's now about 1/3 done - quite time-intensive, and I have ordered more thread, just to be on the safe side - fairly sure I will run out before it's done. I also worked on a block for the Around the World Quilt Swap (see above), and then started working on a border for the Spring Fling Round Robin 3, which I can't show. In all, a productive day. Tomorrow we are off to do errands for most of the day, but I might get an hour in the morning to do some more bits and pieces, if I'm lucky. 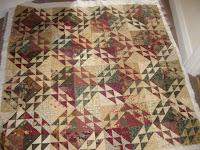 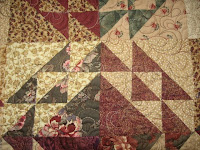 Labels: around the world quilting bee, quilts in progress, spring fling round robin

I've always loved the corn and beans pattern. I might have to add that to my "someday" list!

Kate, this is beautiful!

that's a great colorway for the corn and beans block. lovely!

Kate...love the corn and beans..that is a definite for my list of "things to do". I always enjoy seeing how others do it!

that corn and beans quilt is really coming together nicely...i need to work on my quilting...it definitely adds to the finished piece! very nice indeed :)

Pretty block to join the others - and the quilting's looking great

Wow! Great work on blending with the other squares for the around the world quilt.

Your new collection of blocks is very pretty! Lots of lovely quilting on corn and beans - good thing you did order more thread to be on the safe side! I am sure it will be a much treasured quilt when finished! Cheers! Evelyn

I can't believe your blog didn't make it into my reader before today. That has definitely been fixed now. :) I love that square! It looks perfect with the others.