Blame it on the sun 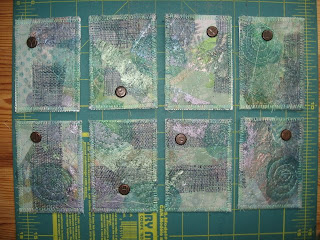 Not much work has happened around here lately. Friday was full of errands - orthodontist appointment for Sarah (impressions made for her braces - the removable type rather than train tracks) followed by lunch, spending pocket money, and loads of bits and pieces, both in Wimbledon and Kingston. It was a gorgeous, sunny day and a bit of shame to spend it running errands, but you do what you gotta do. And it was lovely walking around between the errands.

And luckily, that was followed by two more gorgeous days, where the time was spent doing things other than being inside - i.e. very little sewing, lots of sitting in the sunshine reading, along with paddling pools and general mucking about for the kids. And yes, I confess, a bit of housework.

Today there was a large amount of time spent in the sun, but I also did this (at top) this morning before we went swimming at the local pool. It was supposed to be for the May Challenge on Textile Challenges, which was to creat a postcard inspired by the images from the Google Alphabet and I admit, I was really uninspired for a long time (hence it being the very last day of May before I got to this challenge!). I liked the images, just couldn't think how to get started. Well, I finally did - I started with some complex cloth which looked kind of like an underwater scene, but I knew only bits of the texture would show. I then added bits of painted lutradur, which I attached with free-motion quilting, and some blue mesh shapes and some sheers and some painted bondaweb. Surprisingly enough, all these things gave me the sort of texture I was looking for - a kind of vague, could be aerial landscape feeling. And as it was supposed to be based on an alphabet, I added some letters to finish and cut it into 8 lovely ATCs.

Now, if you've been paying attention, you'll notice I said the challenge was to create a postcard based on the google alphabet. Too bad I didn't notice that myself until after I cut it up! I am waiting to hear from my partner if she minds the difference - otherwise, it's back to the drawing board...
Posted by Kate North at 9:35 pm

It does look like underwater scenes. Maybe there's some abstract alphabet in there somewhere?