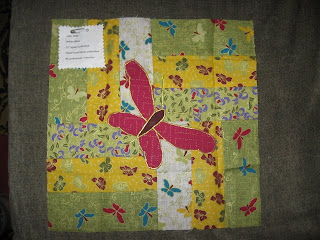 This is the first block I have received for the Around the World Quilt Bee. I have a week to make another block to go with it and send it on - the block is 12" (unfinished, not finished - d'oh - made a typo when I originally wrote this, which means it diddn't make much sense!) which is a slightly odd size, but I'm sure I can manage something - as long as it doesn't have points near the edge, a 12" finished block might work, even. Not sure what I want to do - need to have a check of my summery fabrics I think. Will probably do the block tomorrow - watch this space, as they say.

Otherwise, nothing quilty today, though I did, finally replace my storage unit in my sewing room which kept falling apart every time I pulled out a drawer. Which of course necessitated a bit of a clear-out and some re-arranging. Not the whole room, but it did take an hour or two. So that, combined with some tennis with the kids in the park and two trips to B&Q (one for the new storage in the first place, one later to get one more storage unit and a new clothes line prop, as ours fell and finally broke beyond repair and the laundry was practically dragging on the ground) and some reading in the hot sun (!!) meant no sewing. But there's tomorrow. And Monday. And half-term week. As I said, watch this space!
Posted by Kate North at 11:16 pm

Labels: around the world quilting bee

By "12 unch finished" I am assuming you mean it is 12.5 which allows for .25 inch seam allowances. I don't find this an odd size at all. I have a big square made just for cutting that size.
I like that block. I can't wait to see what you make to go with it.

Looks like a dragonfly minus its tail! It is very nice though. I'm sure you will think of something wonderful to go with it.