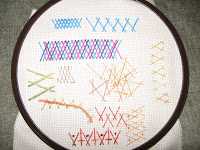 A number of the blogs I read regularly have been mentioning the Take a Stitch Tuesday challenge on Sharon B's blog In a Minute Ago. The idea is that each Tuesday, Sharon posts a new stitch for you to try out - you can then post the results on your own blog or photosite and she does a weekly update of who has tried out the stitch, with links to their photos. [I know, I have no idea when the woman sleeps, either - there are nearly 200 people doing the challenge, and even if half of them drop out partway through the year, that's still a heck of a lot of work - not to mention the stitch lessons and so on in the first place!]


Anyway. The point here is that my stitching leaves something to be desired - I know basically all I need is practice, but the idea of just "practicing embroidery" is somewhat nebulous and undirected and just isn't going to happen. So I decided to go ahead and sign up for this challenge. It started at the beginning of January, so I am only 2 stitches behind, and should be able to catch up quite quickly. Also, it's something I can do while watching telly, so I can fit it into my schedule fairly well - I never seem to have handwork lying around when I need it, so this would fit into that slot nicely. 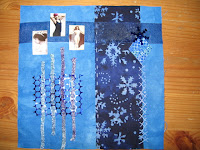 The first week's stitch challenge was Herringbone stitch. Above, you can see a rough sampler that I have stitched on waste canvas - not sure of the count off the top of my head, fairly big - 14 maybe? I started with some plain herringbone in various sizes, did some where the colours overlapped (like that effect a lot) some with thin thread, where the stitches weren't tall enough and just looked like "x"s, then tried couching a large thread down, curving it, adding some other kinds of stitches to make a pattern, and doing some sort of random, freeform herringbone stitches. I'm glad she started with an easy one! Then to apply the lessons learnt :) I decided to add some to one of my fabric book pages, which has been waiting for a few decorative stitches - I was going to use the machine of course, being me! Here you can see a little herringbone down the right hand side of the blue snowflake ribbon - and I've added some French knots in there, too. There's some running stitch down the left side of that, just for balance. 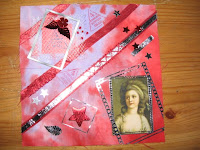 I thought that worked well, so I decided to tackle another page - here you can see a little herringbone across the foil on the bottom ribbon. I like this a lot - it tones down the foil a little, which was very shiny. There's a scattering of French knots at the top and I even used a little blanket stitch (buttonhole) on the middle ribbon - buttonhole is the second week's challenge, so you'll be seeing more of that soon.
Posted by Kate North at 4:05 pm