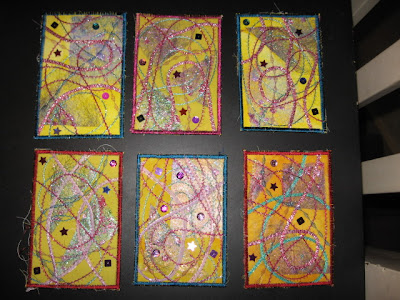 Finished six postcards today (of 16) - still need to be trimmed a little around the edges. I've decided I really love the pelmet vilene for the inside (instead of batting). Great to sew through and so firm I don't need card, which means I can use a fabric back, which means if I use a really heavy satin stitch for the border, it doesn't come loose (which it often does, with paper). Lessons learned, I guess! I did one of these (the first one) with a metallic thread around the edge - I love it, but you should have heard me swearing at it - can't tell you how many times it broke - just not worth the stress, so I switched to rayon - still nice and shiny, but much stronger. Still breaks a bit, but only once or so per card (and that's going around the edges twice each). Much more manageable. We'll see how the sequins go through the post as they are just glued on, but with LOTS of glue, so hopefully they will be ok. I only used really flat sequins, so no edges sticking up to catch on stuff. I like these much better than the solstice ones (the design was fine for those, but the finished product was too flimsy for my personal taste).

Ages ago I made reference to the pay it forward swaps that are happening at the moment on many blogs - where someone offers a piece of their work to the first five takers; in return you are asked to make a similar offer on your own blog. No one took me up on it at the time, so I still owe five pieces to people (if I can get anyone to take them, LOL) - I will have two spare cards from this swap, one of which I have promised to Dormouse, if she wants it but if anyone else is interested in a piece of my work in return for paying it forward on your own blog, there will be one card from this swap up for grabs, and more from future postcard swaps, as needed - the next theme I'll be working on when these are finished is a Valentine's swap. Not sure what that will be yet, but I think it will probably involve red and/or pink...

Hi there. I can't find your email address to send you my real life address. I am hopeless. :)

My email is dormouse@thepowerfamily.demon.co.uk
if you could drop me a line and I'll mail you back with my address.

Those postcards turned out so beautiful.

I'd love one of your cards, I've been holding off because I was so busy, but I have just started my pay it forward today, so now I feel I can ask.