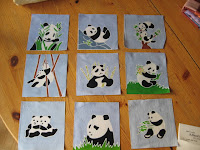 As promised, some photos of the fabric I bought at Farnham Maltings fabric sale/quilt show. The sale is always full of bargains - lots of vendors come with all the stock they are trying to clear out and sell for £3 and £4/metre, mostly. FQs for £1, or sometimes 12 for £10. Not cheap by American standards for fabric, but great for here. The pandas were not a particular bargain, but Alex is really into pandas at the moment, and he has a birthday coming up in a few weeks, so I thought they'd make a nice cushion or something - they are handpainted batiks, so it's not surprising they were a little dear.


In the other photo, there are two large pieces for backings (5m each) - one for a quilt top I've had around for some time that has batiks on the front - hopefully using this batik (the cream one) on the back won't kill me - it's not too tight, so I have high hopes that I'll be able to get through it without breaking a needle, skipping stitches or leaving huge holes... The purple one will be a backing for the nine by nine squares I've been making. 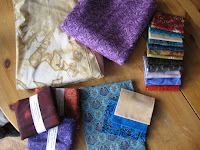 The other fabric, I pretty much just bought to have :) There are 3 one metre pieces, one of which we may use a bit of for a border on Olivia's nine-patch quilt. She bought something else which doesn't really match, so I'm trying to talk her into using the dark red, but you know how little girls are - they think they know everything. And the other pieces, I just liked. Oh, the batik FQs I will need for some swap blocks I'll be doing in February or March. Anyway, it was a fun day. And now I just have to wash it all!
Posted by Kate North at 11:30 pm

Labels: look what i got