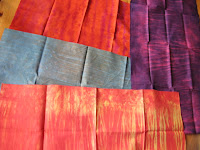 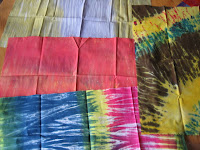 ...is the squishie kind. Today's post was very squishie - got another January cheer postcard (photo later on one of those days I have nothing to show) and these pieces of pipe shibori work from a swap with my dyeing group. Also got some 9 patch blocks from the same group, but I'll show those when I'm doing something with them later - I'll be making split nine-patches with them. Think I must have blogged about the ones I made ages ago, but can't find it, so perhaps not.

Anyway, a great variety of pieces and really fun to have land on my doormat this morning.

I also did a few quick blocks for the February block lotto, but it's still in the sneak peek stage, so I can't show them to you - maybe in February. They are fine, but frankly, not very exciting. I didn't work long today, just did those three quick blocks and added a dozen or so more light green yarns to my fibre landscape. I won't photograph every boring stage, but when the light green hill gets filled, I'll post an update. A small sewing day, but a satisfying one nonetheless.
Posted by Kate North at 9:48 pm

Very nice post. I love the nice texture in those shibori pieces.