Not just because they are fun to make, which they are, but because my machine developed a bad noise (loud hum) and the speed really slowed down so I've had to take it into the shop - luckily, it is still under guarantee, so it should be free to fix it - the engineer says it could be as simple as a thread around something inside, but obviously one has to take the machine apart to figure it out... Or I suppose it could be a problem with the motor, but it's only 6 months old, so you wouldn't think so! The bad part about it being under guarantee is that the shop I bought it from (I bought it at a show) is about 45 minutes away, so Alex and I have had a nice drive this afternoon! There are sewing machine places closer, but not ones that will fix it for free - price of petrol these days, it's a toss up which is better value... 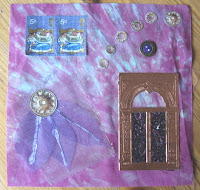 Anyway, the point here being that I can't sew at the moment (though I will borrow back Lana's old machine later in the week, so I won't be machine-less) - they said 7-10 days until it's ready. But with all the fabric pages to do (and a new lesson on Wednesday - can't wait to see what's next) I still have plenty to occupy me - I do intend to go back and add some decorative stitching to some of the pages, and of course, put more of them together, but that has to wait for a machine. So, the left hand side of this page set features some postage stamps, sheer fabric, skeleton leaves, some metallic fabric, German metallic paper cutout, a button and some stickers - on a background of hand dyed fabric. Both of these pages are on the same background fabric this time - I decided it had so much movement in it, I'd like to use it twice. It does need a little more, I think, but I'll do some stitching, etc on it later. 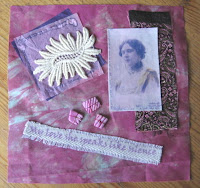 The right hand page uses one of the image transfers I made on Saturday (the photo of the lady) and a piece of twill tape I printed with some words (If Cathi's reading this, she'll recognise them but for those of you who aren't quite the rabid Dylan fans we are, it's from a Dylan song called Love Minus Zero/No Limit) - I had a hard time deciding what to print on the twill tape (that was part of lesson 2, as well) and in the end, picked a couple of lyrics. They seemed to go with the lady. Anyway, also used some tissue paper, a bit of lace passed to me by my friend Barbara from the stash of a good friend of hers who was an artist who often used mixed media including fabric (unfortunately she recently died after a long illness - but I love having some of her stuff - there's a certain kind of poetry in the continuity there, doncha think? I have lots more bits and pieces from her stash and look forward to using some of them in time in my work.) Also another bit of the metallic fabric on the other page, and some shell beads. Whew!