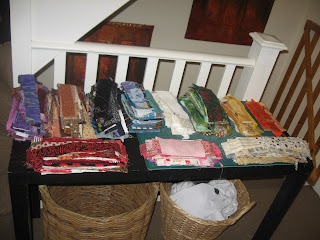 I have a box of strips and strings, as I may have mentioned before. Today's project was to do something with it - and lo and behold, several ideas were found in the course of blog-reading and surfing last night. Scraphappy had several ideas (which I may yet take up) and Sophie had a great string pieced heart - I decided to modify that, working with blue strips as this is blue month, and here's what I came up with: 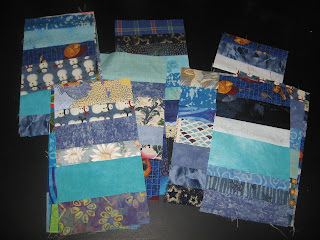 some blue strip pieced rectangles, which I then added white corners to to make 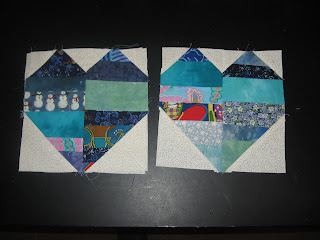 hearts. I've done 3 and have done enough strip blocks for 10 heart blocks. I think I will either alternate the blocks with a different block or with another colour of string pieced heart - haven't made my mind up yet on that count. 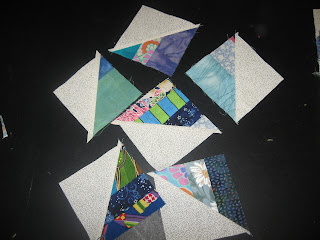 I also have these (and will have more) - the offcut HST units from the bottom of the hearts - these are about 3.5" squares, so they will be large enough to be useful for something. Someday.

This also gave me the chance to sort out the box of strings - a few were decided to be too skinny and went in the bin, and a good handful were too short and relabelled "scraps" rather than "strips" (which means, into the scrap basket) - consquently, the scrap basket is a little fuller than yesterday... Ah well, better organised is good!
Posted by Kate North at 11:54 pm

The hearts are lovely. I can't wait to see what you do with them. I am also enjoying the scrap basket in your side bar.

I am really enjoying your scrappy posts - such great ideas!

That is the coolest part to me. How those blocks become hearts. Awesome, Kate!

You have been so busy! I love the scrappy hearts. You have such good ideas.

These hearts look lovely - and well done you for getting your smaller bits of fabric more organised!

thanks for the links...off to have a look!