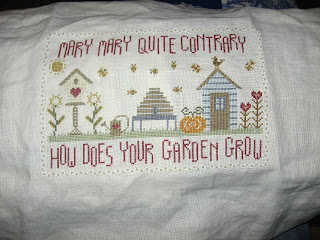 Told you I'd finish it this week... Now it needs to be pressed and a frame found - not sure where it's going to go, but I will keep it rather than give it as a gift, as the kit was originally given as a gift to me...
Here's where it stood last week: 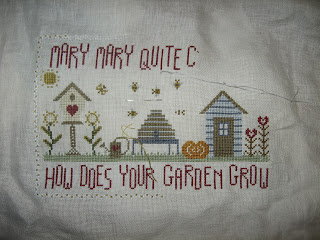 And now, as they say, for something completely different. I debated quite a bit which project to work on next, as I have one or two standing by (or perhaps a few more than that). Finally, I decided on this one, which is a real departure for me - or at least, for what I've been doing lately. It's a much more traditional piece, with lots of colours closely entwined and yes, a fair amount of backstitching. Because I know I will get a bit bored of it at times, I am going to alternate weeks with the Beach Huts I was working on last summer, which are partly stitched. (Can't find a photo of it in its current state of progress, but will update one in a week or two.) 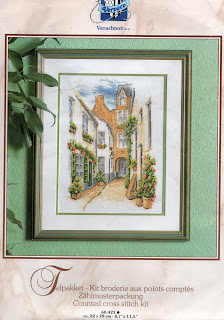 After a few days of stitching, here's how it looks: 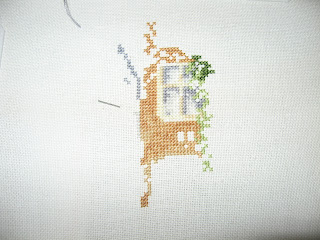 Yes, it's a project which is going to take some time to complete!
Posted by Kate North at 11:22 pm

Now that's the kind of cross stitch I used to do in the days before knitting (and now patchwork/quilting) swallowed up my crafting life!

That's a lovely cross-stitch. Almost worth taking it up, however, given how much I hate hand sewing, I won't be trying it.

Could you tell me who made the pattern? I'd really like to have a go at this one myself.

Mary, Mary looks great! The new one is a bit of a departure from what you have been doing, but it's a really pretty picture

Kate - how strange that the message got bounced back. I'll have to look into that.

I do like Historical Sampler Company, they produce some great designs, I'm actually working on a Christmas one at the moment (a little early I know!)

If you are happy to share the pattern I'd really appreciate it. You truly are just down the road, happy to collect it from you or for the sake of a stamp the Royal Mail may be the most efficient method. Let me have you paypal details I'll cover the cost.