Well, a nice productive day today, with lots of variety. The productivity is due to the rain, largely - if it had been nice, we might have gone somewhere; as it was, I organised a tons of photos on the computer & sewed; Geoff did some work, read, went for a run; the kids played on the computer & DS and did some work on their puffle houses (they have been creating with cardboard boxes & making little creatures out of pompoms - it's a whole town in the living room - I should really take some photos only they keep telling me they aren' t done yet...) 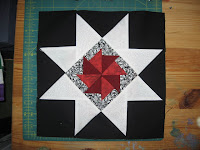 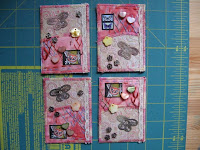 First order of businesss was this block in black, white and red, which is the March birthday block for Vicki - I know, it's late, but she's running behind herself, so I have put it on a back burner for a while. Finally got a chance (and the inspiration) to do it today).
And then I made some ATCs, using (among other things) a bit of the paper I bought at the craft shop at Millet's Farm on Wednesday at the bloggy picnic. 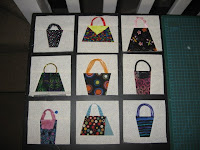 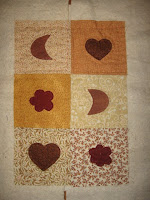 Then I went on to work on the April calendar page for the BQL challenge - handbags - which I shall put together & quilt tomorrow. It's only small - the blocks are about 5 inches square at the moment. The handles I shall leave free floating (mostly - will tack a couple down in places).
And finally, this piece on the right is a small sample for a "class" I'll be teaching - sort of. I offered to run an after-school quilting club next term (an hour once a week for 10 weeks) for the Year 4s. A lot of the teachers & TA's at school run clubs once a week - there's a minimal fee for the children to take part - and last term, there was virtually nothing for Olivia's year available, so I decided to step into the breach. I needed something which could be done by hand and which would be simple yet impressive. I decided to start with a small wall-hanging, the background being 6, 5" squares with small appliques (fused, then stitched over, but raw edge) with some handquilting. I confess to piecing the background on the machine for this sample (and likewise, will attach the binding on that way - in fact, I may take in my machine the week we do the binding - I will sew it down by hand of course, but can't quite see putting it on by hand - I know it's possible, but it's not necessary!) but I did do the quilting by hand (yes, really) to show that it can be done. It's not wonderful, but I think it's good enough not to be shown up by a room full of 8 & 9 year olds!

I've noticed a few of these April BQL quilts on blogs...I think it is the prettiest one yet...I never got past January! oops

The idea of putting on a quilt club day at the school is truly amazing and I'm sure those taking part will appreciate your efforts and your knowledge. Great job!