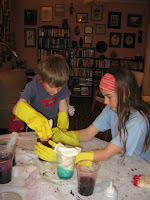 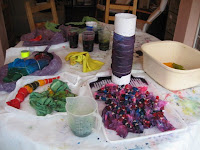 Spent part of the day today dyeing, as I am taking part in a resist swap. I decided to do rubber band resist (my favourite) though I did do a small piece with elmer's glue, which I really liked (I've done this before, but today's was better) and may well do some more of those in the near future. I tend to only dye once in a while as I have to get lots of stuff out and it takes up space and so on - if I had a wet studio (or a basement or utility room) I might dye more as I could leave supplies out and leave things batching more conveniently, etc.
Anyway, the kids wanted to help, so I dug out a few old white t-shirts we had lying around as well as a white duvet cover we got ages ago with the intent to dye. We also did some shibori (folding, tying, banding) (like the pipe one, which didn't turn out - I think it was a problem with the fabric, which, although it was in my dyeing stash, didn't take up the dye well in places - my hunch is it wasn't PFD and needs scouring before dyeing with!) and some parfaits (layering fabric in containers and adding colours). Quite a few things turned out well, luckily, though Olivia's shirts weren't quite as colourful after washing as before - she still likes them, though. 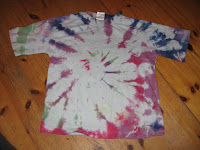 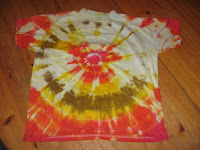 The spiral one didn't get enough dye in the middle - which I suspected might be the case - if she wants, we'll over dye it next time we have a dyeing day. The red/yellow/brown one worked better, though it still has a fair amount of white in the centre (I might throw this one in a pale yellow...)
Alex's shirt, on the other hand, worked better, because we didn't fold it up much - did it flat. He put some rubber bands in it, then picked the colours to do the bunched sections, then I did the background with a pale green. He loves it - partly because it's cool, partly because he made it himself. 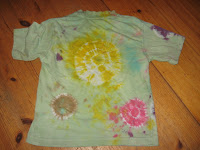 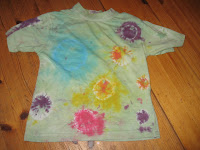 Here's the duvet cover - quite successful considering how much fabric there was once it was folded up. It seems to have lost a lot of the red, which worried me, but looking back, I think it was actually Hot Pink they used, a dye with which I've had problems before - it just seems really pale. Personally, I like the subtlety and remarkably, it looks like this on both sides - the dye has really gone through nicely. I got the duvet cover from the LaRedoute catalogue and have dyed their bedsheets before as well (yes, the gathered ones - that was fun!) with good success, so I do recommend them if you are looking for inexpensive white goods which dye well. Sarah gets to have the duvet cover on her bed first as she didn't get a shirt (nothing in her size knocking around).
The right hand photo is the rubber-band shibori for the resist swap. This is one of my favourite ways of dyeing fabric - you can see it in process in the top photo - it's the alien looking thing in the tray at the front - I rubber band (with nothing inside) bits of fabric- kind of like doing stones, only with no stones - sometimes a single band, sometimes two or three, then add dye with a small pipette to these peaks. Once that's done, I add colour to all the valley areas. I love the control this gives and I love the effect of the rings. This is a metre piece, but I am only swapping 5 eighths, so I will have some to keep. 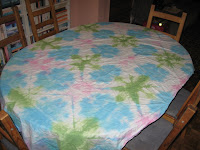 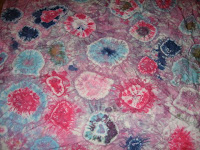 And finally, the green is a fat quarter which I wrote on with Elmer's Gel Glue - I managed to get the glue to come out quite thin, which is why I think it worked better than the last time I tried it. I just used random, positive words - next time, I might try a piece of text. Then I dried it on the line so the glue would be dry, and threw it in a cup of green dye. Worked really well I think. The fabric was pre-soaked in soda ash and dried in this instance, but I'm not sure it would have mattered.
On the right are two FQs of the fabric which didn't work with the pipe shibori - these pieces were done by cramming them in cups and adding different dye colours - you can see how much white is left - and the two sides of the fabric (i.e. front and back) are different, so there was clearly a penetration issue - sizing left on the fabric or something. As it happens, it's worked to a really nice effect on these two pieces, even if it didn't work on the shibori at all! 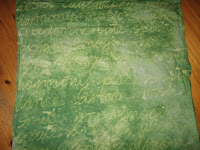 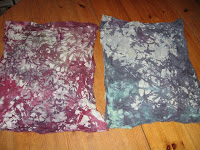 Oh wow ... that is such an interesting post. It's amazing how much difference there is between all the pieces - my favourite is the green with the writing on ... that is totally brilliant. I can understand why Alex loves that t-shirt - so would I! x

Love dye jobs but I always felt it was too much work and so I never tried it. Maybe if I had someone close by to help me, I might try it.

We were good for nothing on Thursday..exhausted from all the fun on Wednesday.

Love the green fabric with the writing...wouldn't mind more info on how you did that.

Gosh! that looks messy!!! but lots of fun, and the results are lovely. I like the swirly t-shirts the best .. oh, the duvet cover is nice too ...! x

beautiful fabrics.....but it needs a lot of work in these i tried alot and now from this i get more ideas......

You got some lovely effects with the dyeing. It's so much fun, I really enjoy playing with dyes when I get the chance. Did you get the Elmer's glue in this country? The T-shirts look great, maybe they'll start a new trend with the children's friends!