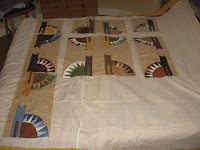 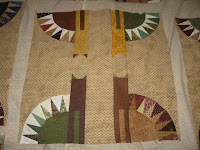 Well, as my April goals and deadlines are proceeding along apace, I decided to tackle something I've been ignoring - my sawtooth cats. I had planned to make one a month starting in February, but it just wasn't happening. Not sure why, as they aren't that hard, but somehow I lacked motivation. It might be simply that there are lots of pieces to sort out for each one - even after you do the backs - and because of the layout, they aren't necessarily the same in each block - and so on. However, today I got stuck into it and made 6 blocks! The bottom left two (the backs for these were already done), and the group of four in the centre. Tomorrow I will try to do some more, as I am in the mood now and also, having worked on it today, it's fresh in my mind and will hopefully be less hassle to figure out because of that.
In theory, this quilt will be for my mother's spare bedroom, but she tells me there's no hurry for it, as she will have to repaint the bedroom if the quilt is to look good in there. I am thinking I might try to get it done for her next visit, which is in July. We'll see, but it somehow doesn't seem quite as insurmountable an obstacle as before!

I love this quilt! It is going to be lovely.

I'm glad you are finally getting to the cats.... Well, I think I am glad. As long as you don't have the quilt done, I don't have to decide on a new wall color for the guest bedroom. And the cushions on the rocking chair won't go with the quilt, so there is another things to change. However, on the plus side, I have an antique lamp that has been packed away since I moved here because it is green. It will look very nice with the colors in the quilt.
love,
Mom

Love the cats. Are they paperpieced?

Oooh, lovely, Kate :-) They are making me think of all things Aztec for some reason - must be their gorgeous arched backs I think. x

Oooh, I am loving those cats. Fantastic shape, and the triangles are wonderful. You are so productive ... it puts me to shame. x

They are pretty...I love how each one is its own colour wave.

Remember how we were talking about waterproofing picnic blankets....I think this post might just be getting to the answer http://littlebirdiesecrets.blogspot.com/2009/04/denim-picnic-blanket-quilt-along-part-3.html

A snap on waterproof liner! Hmmm got me thinking! :o)

A lady in my quilt guild named Sandy Wachta made one of these quilts. I have always been in awe of the finished product. I'm sure yours will be just as amazing.

Lovely cats. I know what you mean when you said, if you don't keep at it, it is difficult to get back in the groove. I put my snowman quilt pieces away while I did my housecleaning and now I almost hate the thoughts of going back to it. No rush till Fall - that is what I tell myself anyway!

I really like those Kate, I've never seen that pattern before.