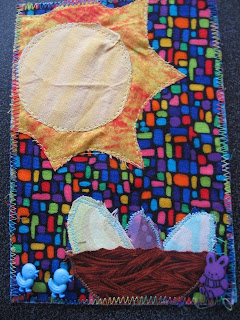 We'll start off today with something different - this postcard with an Easter theme was made not by me, but by DD2 Olivia for her friend Jiwon, who recently moved back to Korea. She perhaps left it a bit late to reach Jiwon in time, but it's a lovely card nonetheless. I did help a little - I cut out the sun (the background part) and oversaw the general construction, but the design and most of the work is hers. Not bad for a nine-year-old. I especially like the nest, which was entirely her concept and work - very clever. 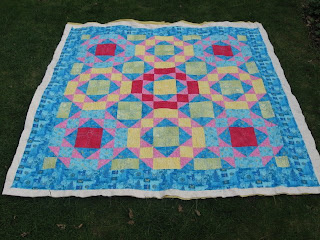 What I did myself today, was to finish (!!) quilting the Contrary Wife. We ran some errands this morning, including a trip to the department store for more thread (of which they didn't have the same colour, so I have use a very slightly different colour to finish - I couldn't tell the difference myself when going back to check later, so I don't think anyone else will be able to spot it, even if they look!) and some notions (like Olivia's Easter themed buttons, above, and my booty, below). This afternoon, the two kids who were here (Sarah was at a friend's house for a birthday sleepover weekend - she was there almost two whole days) parked themselves in front of a DVD and I did some sewing. And amazingly enough, finished it. Tomorrow I shall make and attach the binding, then hopefully a few evenings in front of the telly will finish it completely. I did tell my customer I'd try to finish by mid-April, and it looks like this will actually happen, which is great. 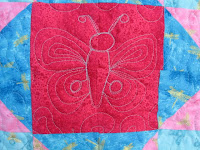 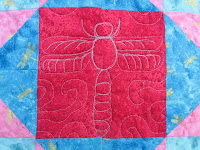 Here are the other two insect blocks. Another dragonfly and butterfly, this time I have reversed them so that butterfly is uppermost (or maybe it's the other way around - anyway, it's opposite to the right side, so the ones that are the same insect are diagonally placed from one another). 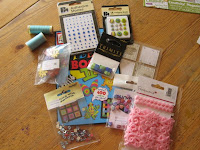 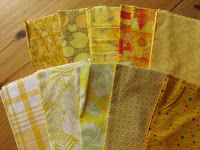 And here are some treats - the aforementioned notions, most of which came from the sale bin, and the thread to finish the quilt - I bought two similar colours to what I had bought before (which of course, I hadn't taken with me, only having made a note of the number) - one of which was much better than the other, but hey, one can always use up thread, right? And on the right, some yellow fabrics - this month's club from eQuilter. If Joyce is reading, she will no doubt spot the yellow/orange colourway of the blue fabric which makes the border of the Contrary Wife quilt - I know from her blog that she's recently acquired some of this herself...
Posted by Kate North at 9:52 pm

Labels: commissions, free motion quilting, look what i got, olivia

Please tell Olivia that her postcard is wonderful!

I love the quilted insects and the postcard is beautiful!

Olivia is artistic like her mother. Great job Olivia!

I've noticed for some time now that Olivia has a real artistic flair. Isn't it fun to have another artist in the family? I used to get a lot of pleasure out of seeing Steve's drawings, especially since you and I did not have that particular ability! Luckily, we have found other ways to express our talents.

Tell Olivia that Grandma Kathy thinks her Easter postcard is really special and her friend will surely enjoy it.

Olivia's easter egg nest and chickadees are adorable. i am sure her friend will cherish it.