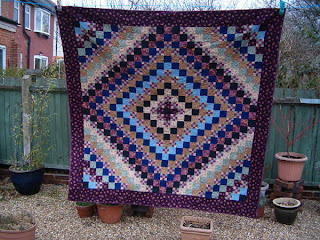 Of course, as I mentioned yesterday, it's very hard to choose just one quilt to show and as I went to bed, I saw this, which is virtually always on my bed and realised it it's probably even more of a favourite in some ways than the one I showed yesterday. As it's older than the blog, I won't have blogged it since it was made, though you do get glimpses of it from time to time behind/under other things when I lay them out on my bed - the sawtooth cat blocks the other day, for instance.
It's hard to see the quilting detail in this photo, but you get the general idea. I won't write much about this, as I hope to be able to blog actual NEW work later today and that will no doubt be wordy enough! 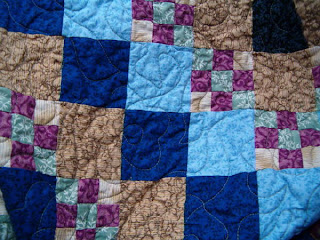 I like the trip around the world. Very nice.

It's really pretty - my Mom just finished a TATW and is working on one for me. I like the pieced squares too - adds extra interest.

What a stunning quilt I love the colours in it.

Oh my - now THAT is something else. It's wonderful! x

I really love the way the blue pops. It's just the right amount of wow!