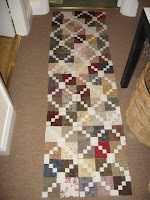 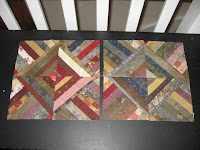 Another snow day today - back to normal tomorrow, though. But in the meantime, I spent a good part of the day sewing (though we did go out to collect a friend of Sarah's and get some donuts from Krispy Kreme - these two things are often connected, as Jess lives just up the road from the Krispy Kreme shop) and the kids mucked about outside playing snow games, having snowball fights and so on. But by the end of the day, they were getting a bit fractious, so it's good they'll be back to school tomorrow.
Today I worked on two different projects, both involving Japanese taupe type fabrics - both authentic taupes and some fabrics which aren't really, but look it, which is good enough for me. On the left is my dresser runner, whichI have been in the process of making for a long time, but which had kind of stalled. Today I finished the last dozen or so blocks and started putting them together - here, they are in twos and threes, so it's getting there. Might get it finished tomorrow morning.
On the right is the February challenge for BQL - sort of. I used the same sort of string pieced triangle blocks but have made mine smaller and put them together in a different kind of configuration. And yes, there are two, I know. Originally, I had planned to put them together differently and make a larger hanging, but as I was playing around with them, I decided I liked this arrangement better. Even if it did mean two. One I shall keep for myself, the other will be made up as a present for someone, so it won't go to waste. Not that they are quilted yet, of course, but at 12" square, that shouldn't take long.
Posted by Kate North at 11:29 pm

You made great use of a snow day! The dresser runner is very nice.

Love the color combination in the dresser runner. You must have one HUGE dresser, Kate!

I remember that dresser top. Glad you are back to it. it's a beauty!

Love the dresser runner. Great work even if your kids had a snowy day.