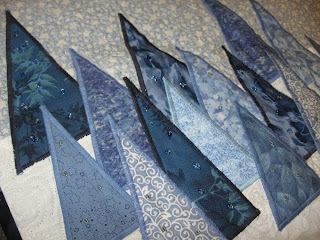 Well, I didn't really work on this piece today, other than to attach a label, but as it's going in the post tomorrow or Tuesday (to someone in another country - which I don't think gives much away as there are only two or three of us in the UK playing along this time!) I thought I'd show it again with the beading done and the binding sewn down. You probably can't see that in addition to lots of blue beads in the trees, there are also a number of clear beads sewn into the sky - terribly hard to photograph, but in person, it does add sparkle. Anyway, I'm hoping its new owner will be pleased with it - I was very happy with how it came out. 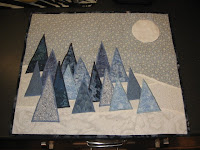 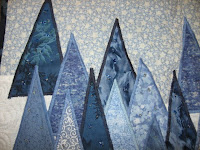 I did actually do some work today, but it was yet more pineapple quilting - nearly done now - there is only about an 18" strip left to do, so probably one more good session will finish the quilting. Hoorah! And now that I've finished with the very centre of the piece, it will be much easier for my poor little machine to cope with. Actually, the machine copes very well, despite having only a normal sized throat - it's my shoulders and arms which suffer, with trying to manouevre all that fabric around under a little DSM.
Posted by Kate North at 10:46 pm

This is beautiful. What size was the finished quilt?

I love it. It looks a bit Canadian. Must be all that snow!

I like it a lot. Mine will go into the mail later this week.

Very nice, whoever gets that is going to be very happy for sure.

Love this idea. I have a packet of blue, white and silver fabrics that I was going to use for a boring old table runner. Thanks for the inspiration!

very pretty...wish it was coming to me :)

Its new owner is VERY pleased with it! Thank you Kate, I love it!

And it's even prettier in person, because it's so hard to show sparkle in photos. You're right, it's not very Australian - but I see Australia every day, and snow not often enough!

I'll be blogging it tonight, and hopefully it will be up on my wall by then, too!