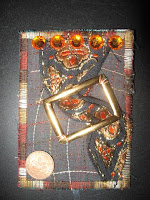 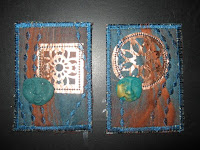 Today I made a load of ATCs - several of them to catch up with challenges on Textile Challenges, and others just for fun. The first one (above left) was for week 2 of our February challenge on Textile Challenges - we were to go to a room we don't normally work in, grab an object to use, then find 4 more items to use on the card, and make the card, with a 15 minute time limit. From my bedroom, I grabbed a small (defunct) coin from a box DH keeps in his dresser drawer, then grabbed a piece of background fabric, a ribbon and a buckle from my sewing table and assembled them. When I finished, I realised that I can't count, and grabbed the packet of "jewels" which form the line across the top. It took me 17 minutes, including a brief phone call and a short interruption to find all the newly washed fabric for my mother to iron (she offered). It's not my favourite of all the ATCs I've ever made, but it's ok, and again, an excellent exercise in not overthinking things.


Then I tackled week 3 of the challenge, which had no restrictions on it other than to keep an eye on how much time it took you. I decided to combine this with the colour combination lottery, in which my assigned colours were burnt umber and teal, so made two cards with that colour theme. I started with the background fabric which is a slightly reddish brown, and added teal and reddish brown wool fibres -I was originally intended to hand needle-felt them, but couldn't lay my hands on the needle bit of the needle-felter, so just decided not to waste any more time on that and stitched them down using some invisible thread. I then added some copper foil, which I'd punched with my new big punches (on half price sale, though still a little dear, so I intend to use them a LOT to get my money's worth!). Then I added some stitching in teal coloured rayon thread (nice and shiny) and some faces in teal polymer clay. These two ATCs took me about half an hour, including at least 4 minutes wasted on a background which really didn't work and has been stuck into the "do something else with later" basket. I really like these, and if I'd had more copper foil to hand I'd have made at least 2 or 3 more. 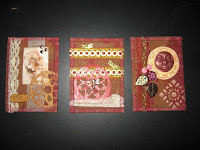 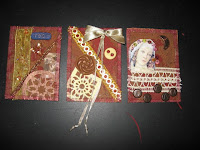 After I'd discharged those obligations, my mother and I decided to have a play - she had asked if she could watch me make some ATCs (which she certainly is welcome to do) but I suggested instead that we simply make some in parallel. However, as she's not really into sewing, we used mostly paper and glue with a bit of stitching thrown in. These (mine left, hers right) are done on a rusted paper background, with ribbons, paper, punched paper, polymer clay, beads, brads, buttons, bows, jewels and so on. We had good fun with them and now she has her first set of ATCs. I always find it interesting to see what happens when two people use the same set of ingredients - whether their end results are similar or (more usually) quite different.
Posted by Kate North at 5:24 pm

Love the ATC's you did with your Mom. I was almost tempted to do some for a minute there ;-))
xka

Great ATCs Kate! Thank you for sharing the link : 0 ) lenna