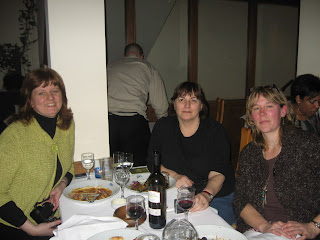 So, I'll start with the end of my day, and work backwards. This evening was the much remarked meeting for dinner of Helen (left), Julie and me - and my mother, who managed to avoid being photographed by taking the photo. Digital cameras with an LCD screen are a real boon for my mother, who used to be well known in the family for her ability to chop off the top of people's heads... Anyway, we met up, we ate, we talked - and not entirely about quilting and swapping - it was fun. I've met Helen before, as she lives a little closer than Julie does, but it was great to see her again and to meet Julie for the first (but hopefully not the last) time. I only wish I'd had the whole day free to spend doing not-very-much with them.

Julie brought me the issue of Mark Lipinski's Quilter's Home Magazine with the article about controversial quilts in it - I can see from a quick browse on the train that while this magazine is a fun and sometimes irreverant take on quilting and related issues that it might get kind of samey after a while - there's only so many times you can be addressed as "poodle" and similar before you get a little weary. The article on controversial quilts was interesting, though, but I suppose it's somewhat telling that I didn't find any of the quilts pictured to be particularly offensive - and some of them not even what I'd call controversial!

The two postcards are from Rita (Valentine's Shaker) and Wanda (Z for Zoo). 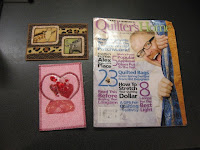 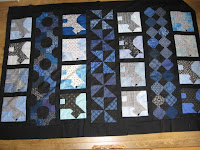 And yes, some work was done this morning, before I had to go in to do my actual (i.e. paid) work. First off, I took the opportunity of not having the kids in the house to add the black strips to the side of the Scottie Dog quilt. This is a small task which shouldn't have taken so long to get to in February, but between the snow days and half term, a lot of my sewing days in February were while the kids were around, and Sarah doesn't know about this quilt, so I didn't want to work on it while she was actually there. Anyway, the black strips are now on, and so the quilt is ready to be quilted. It may not happen any time very soon, but at least it's ready! Pardon the sideways photo, but it looks even odder turned around to face the right way...

I didn't have a huge amount of time though, so after I put on the black strips, I just grabbed some blocks that were waiting to be put together - the little retro bento boxes from the other day and some brown and cream batik batik blocks from a swap a few years back. Not sure what will happen with the bento boxes - it's too big for a mini wall hanging and too small for a baby quilt- I think it needs a border of some sort, but I will have to find the right fabric. Time for it to sit in a pile and wait! The batik top will become a baby quilt - there are papers on some of the blocks which have to be removed, and actually, the tension went out on my machine somewhere during the last few rows I was sewing together, so I'll have to take them out and do it again - but essentially it's done. My two friends who are having babies in June are both having boys, so one of them will get this one. .. 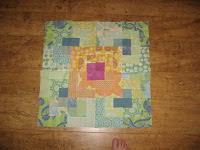 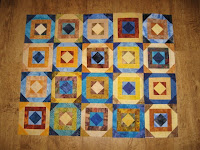 Labels: baby quilts, finished tops, look what i got

Happy to see you got to meet up with blogging buddies. Sounds like fun.

Love the black border on the scotie quilt.

Neat to meet up with other bloggers! I met Julie last fall at PIQF, so much fun. As for Quilter's Home, I agree. I find the tone annoying, but at least it has things other quilting mags don't. I like its product comparisons.

These quilts are beautiful! Glad you guys got to meet up in person.

I confess I talked Julie into letting me read your magazine on the tube between Green Park and Southwark - thats about how long it takes. I agree with your comments.

Yellows and Blues are always so cheerful, great blog, thanks for sharing,
Sharyn/KalamaQuilts