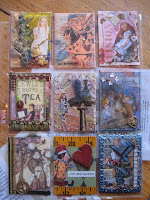 Here are some lovelies I got in the post today - on the left, the ATCs I received from the Alice in Wonderland trade on Creative Swaps. The cards are from (top row) my own, Frieda Oxenham, Linda Garcia; (middle) Sharon Walworth, Betty Cassidy, Darlene Kihne; (bottom) Jan Williams, Lynda Roddy, Shannon Lane Sawyer. They are all wonderful, as are the other cards I saw on the swap blog. I'm very pleased I participated in this swap, which I almost didn't sign up to because of the requirement of using images from Alpha Stamps' Alice collections. (Nothing against Alpha Stamps - indeed, the opposite - but I am trying to moderate somewhat the amount of stuff I order, so am limiting the number of swaps which require specific image sets.) But actually, it was well worth it, as look at the extra goodies I got returned with my swap - I got three image sheets on paper and a fabric transfer sheet AND I got a package of fabrics. All the swap participants got one or more image sheets from Alpha Stamps; the rest of the loot is from Lenna (the hostess), as a prize for her choosing my set of ATCs as a special honourable mention in the "most creative" contest. How cool is that?

If you are thinking of dipping your toes into the swap world and aren't quite sure where to start, you could do a lot worse than sign up to one of Lenna's swaps - not only are they incredibly well-organised and very prompt in their turn-around, but she puts a lot of work into thinking of interesting themes and ideas and always seems to include some sort of extra goodies in with the swapped items. Plus, she's really nice!

I did do some work this morning while the girls slept in a bit (having stayed up quite late with a friend sleeping over - it's the half-term holiday here, so no school this week - they were pretty quiet, so I didn't mind the staying up late so much!), but unfortunately, I can't show it to you, as it's the centre for my Spring Fling Round Robin 3 - we are making our own centres for this round, so in order to keep them secret from the next maker, we are not allowed to show them at all, not even a peek. When Margaret (the hostess) receives them, she will post them to the swap blog so we can all see them, without knowing whose is whose. 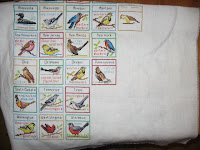 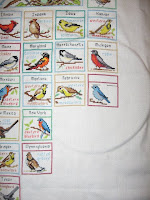 I can, however, show a little progress on my cross-stitch. Not a lot of progress, as I didn't work on it much this week - this is not simply because it's been boring me a little, but because I have done some beading on my 4SQS5 (blue winter) mini and done bindings on a couple of small pieces, so haven't had so much time for cross-stitching. Still, I managed to finish off Nebraska (Western Meadowlark) and do most of Nevada (Mountain Bluebird). Once I get him finished, I am going to start on the little house sampler for Cathi. Which I will enjoy much more, I'm sure.
Posted by Kate North at 6:55 pm

Labels: atcs, cross stitch and embroidery, look what i got, spring fling round robin

What an interesting cross stitching project. You are one busy lady.

You know I love seeing those birds!

Love the Alice cards! And I love the little package you send me, especially the thought pedant which will got straight to my new bags zipper :)Thanks so much, it was great swapping with you

Well, you've been busy. I've been rather preoccupied lately with getting my son married off so haven't had much time to keep up with blogs. Feels like I've been gone ages.

Those Alice and Wonderland cards are awesome!!! and they look great displayed together!