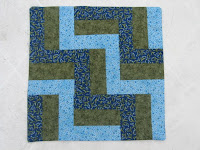 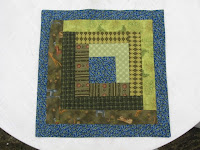 When my mother arrived for this latest visit, you may recall she brought me lots of fabric - this is a good thing, of course. One caveat of this gift was that I help her or show her how to make a basic patchwork cushion cover from one of the fabrics she brought (she'd made a number of plain covers from some of them, but wanted some inspiration and guidance for doing something pieced). We played with some basic patterns, and ended up liking two things best - a rail fence and a log cabin block (we didn't move beyond squares and rectangles in this instance).

The log cabin block was made almost entirely by my mum - I did a little bit here and there but on the whole, it's her work. The rail fence, she asked me to go ahead and do myself as we were getting tired and we knew I could put it together much faster than she could. Which isn't to say I didn't first sew the strips together in the wrong order and then secondly go to cut them into blocks and realise I'd cut the strips too wide. (2.5" instead of 2" - the log cabin strips were 2.5" so I just cut the others the same - d'oh) However, I probably still got the cover together faster than she could have done, so it still made sense for me to do it...

I think they look very nice and will look even better with some pillows inside, but obviously she won't do that part until she gets home. I'm sure she'll have something to say about the whole experience over on her own blog, but I got to the computer first, so I jumped the blogging process, so to speak. It was a fun day of sewing, though I do tend to make fewer mistakes when I'm not trying to piece a block, have a conversation, do a jigsaw puzzle (with Alex) and teach patchwork all at the same time. Which is perhaps not very surprising!
Posted by Kate North at 4:14 pm

Nice :-) Log cabin is, I think, my absolute favourite block. Well done your mum! There's something quite comforting about a railfence too - I like these simpler blocks. X

I really enjoyed reading your blog...especially the UNFORTUNATELY ...list! I had to laugh... at some of that! Lovely pineapple quilt. As are the littles too. Very fun blog.