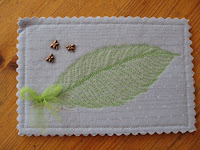 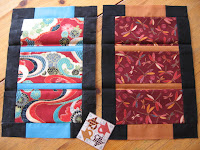 Got these two great squishies in the post today - well, I guess the post card is not so squishie, but you know what I mean. The card is from Amy, and is sort of part of the Earth Day Swap - I say sort of, because although we are both in the swap, we are in different groups - but we each liked the other's card, so swapped anyway. That's postcard addicts for you... The other squishie was of course, more lanterns - great fabrics here, very different from one another and from most of the other fabrics I have so far, which is brilliant - that was the idea, after all. Also a lovely little fridge magnet as a hostess gift, made from postage stamps - very clever. Thanks to Hilda, who made both the blocks and the magnet! 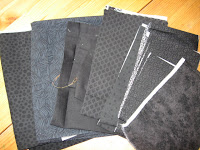 And one final squishie today - more black fabric - lots of it this time (I wish I'd had some of these before the lantern swap; they'd have made great backgrounds for that - don't worry though, I have an idea to make mini lantern postcards when I have some spare time, ha ha). These fabrics are all from Freida, to whom I sent some bits of silk and a tie in return (though to be fair, she would have sent the black anyway, generous woman that she is) as she is making a tie quilt. More power to her!

Now on to stuff I actually worked on myself, instead of just admiring other people's work (although I really enjoy doing that) - these are some postcards (surprise, surprise) for the theme "sky", due to mail out in early May. I had an idea I wanted to do a cloudy sky, but it was surprising how complicated it turned out to be to turn this into a reality. The other day when I was melting Tyvek (as one does) I got the idea that it might work as the clouds, so I started with that. But it was a little stark, so I decided to try what had originally been my idea for clouds - cotton wool (cliched, I know, but sometimes cliches are there for a reason). So I added some cotton wool to the tyvek clouds - better, but still not quite right. So the next step was to add a little angelina over the top (when in doubt, add angelina - that's my new motto) - much better, it softened up the cards a little and gave the sort of effect I was looking for. At the last minute, I decided a little sun peeping out from behind the clouds couldn't hurt, so added some Angelina suns. 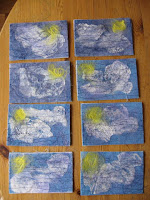 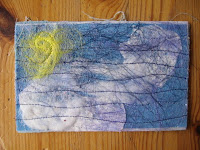 The cards still need to be satin stitched, but I decided to take a break and do a couple sample blocks for the May Block Lotto on about - I can't show them yet because it's not public until (you guessed it) May, but I did work on them, hence the lack of postcard edging. Maybe tomorrow...
Posted by Kate North at 8:45 pm

Addict? Who're you calling an addict?! Glad to have made you smile, and I gotta tell ya, the card doesn't look any the worse for wear.

The clouds are fantastic, too.