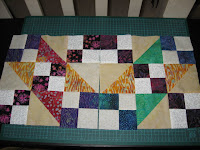 (though I keep thinking today is Saturday - not used to having a bank holiday on Friday, I guess).

So, here's what I actually did today - in addition to putting together the rest of the four patches from yesterday into either a double four patch, or the other block, which is made up of four small 4-patch units. These are two batik and cream Jacob's Ladder blocks, for a block swap on about.com. I think they are going to look really nice - they are supposed to contain at least 3 different batiks in each block, which is great, as I can use up some of my smallish scraps. I probably won't use more than 4 batiks per block (what these have) as I like the symmetry, but we'll see. 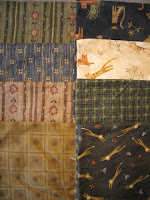 And this is a new acquisition - I got these in the post yesterday I think, but have washed and dried them now - despite dyeing my own fabric and so forth, I also really like commercial fabrics, too, but I try not to spend too much money on them. I belong to one fat quarter club, where you get 8 FQs a month at a discount price - the shop that runs it uses it as a way to get rid of old stock, etc. It's not dirt cheap, but it's a lot cheaper than it would be by the metre, and it's fun to get stuff in the post. Many of the things they send are quite country, and although I wouldn't describe that as my style, I find that much of the fabric they send is really useful, either because it's tonal or because it fills some gaps in my stash. Anyway, it's fun. I usually belong to some or other type of fat quarter club for a few years, then quit that one and change to something else.
Posted by Kate North at 3:41 pm

Labels: block swaps, look what i got

I like what you're working on. I really like the colors. I am just starting to do my own fabric. I do a lot of scenic and landscapes so really like the look of hand dyed but don't like the cost. :}
http://thetravellingquilter.blogspot.com/