More in the alphabet series 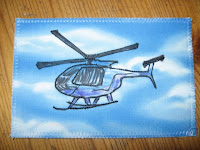 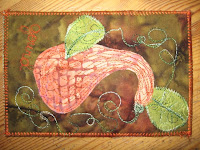 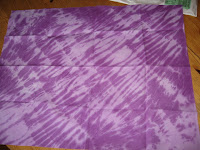 No work done of my own today, because the weather was glorious (finally!) so we headed out for a day at the amusement park. Fun was had, friends were bumped into while standing in queues, small people (and big ones too) are worn out. After so much bad weather, everyone was just in a really good mood today, I think; it was a very nice day out (more on my family blog if you want to know).


Came home to some fun post - two cards from swaps - Helicopter from "H is for..." from Nancy, and Gourd from "G is for" from Melinda. Just realised the gourd card is sideways as the word "gourd" isn't right way up. I'm not going to turn it around here, you'll just have to imagine it!


The purple fabric is Karen's CCRR, after Judi has shibori-ed it. I now have to do something to it, but not until August, so I think I will let it sit and wait until it speaks to me. Or until the end of August, whichever comes first...


I did also make two half-cats (ick, as my mother said) last night watching telly - just the backs and bellies, basically - but I'll wait until I attach them to the front half of the cats before posting a photo. They look nice, though - it's going to be a fun quilt (I know I said that before, but luckily, it's still true).


Tomorrow we are going to mostly stay home and rest (the kids will probably watch telly until most of the morning is over - they deserve a few days like that in the summer, after all) so hopefully, there will be lots of sewing!
Posted by Kate North at 9:24 pm