Tops which are finished and waiting to be quilted.  A lot of the baby quilt tops I don't quilt in advance of actually needing them, because they take up less space to store if they are just tops.  The other pieces, well, there's less excuse for them, though I am slowly making my way through them by having them longarmed a few at a time either just because or for specific occasions. Here's what's in the piles at the moment: 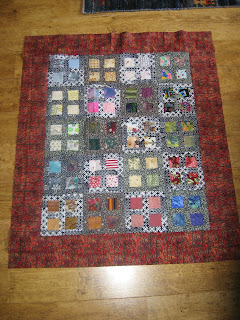 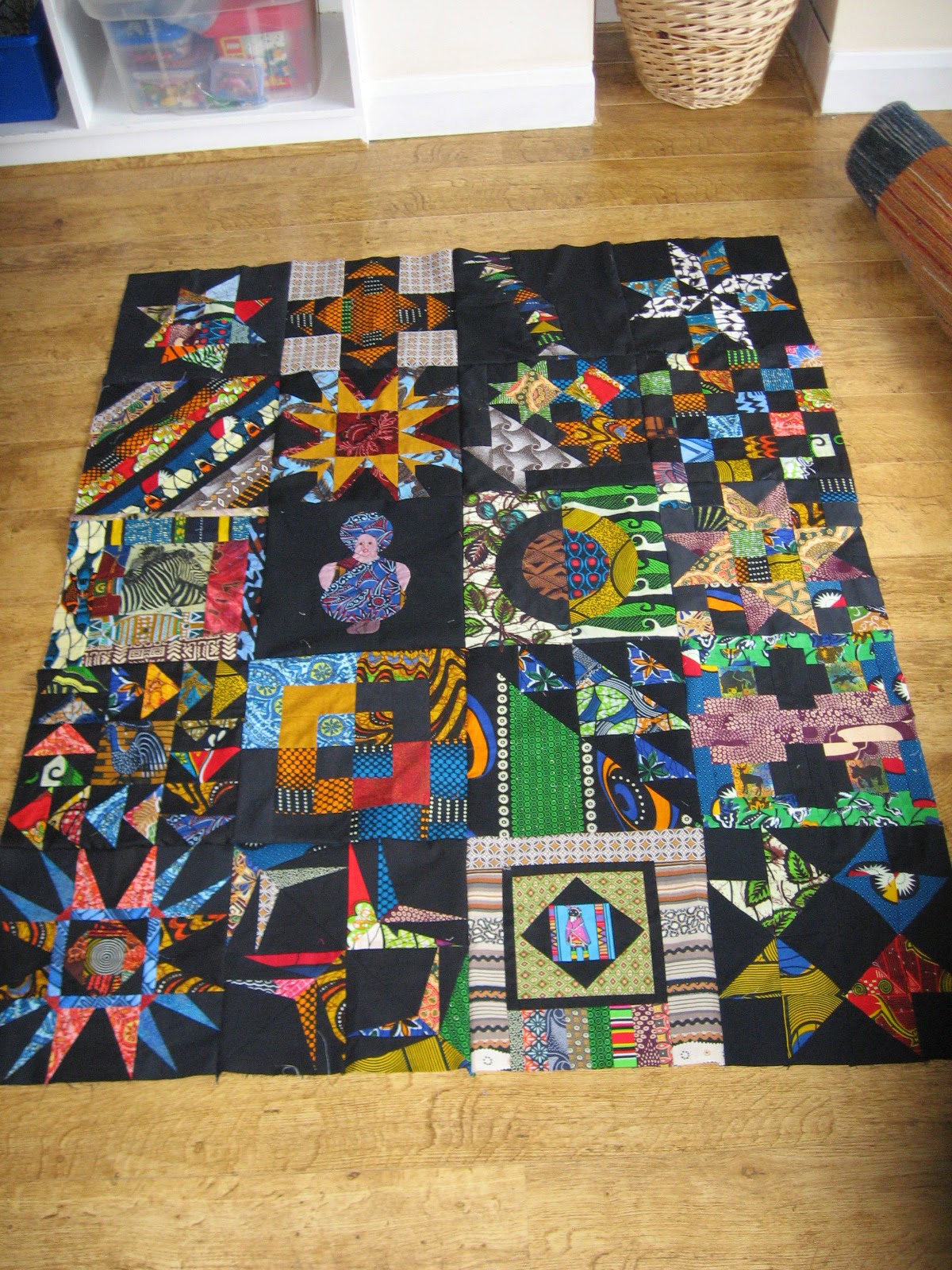 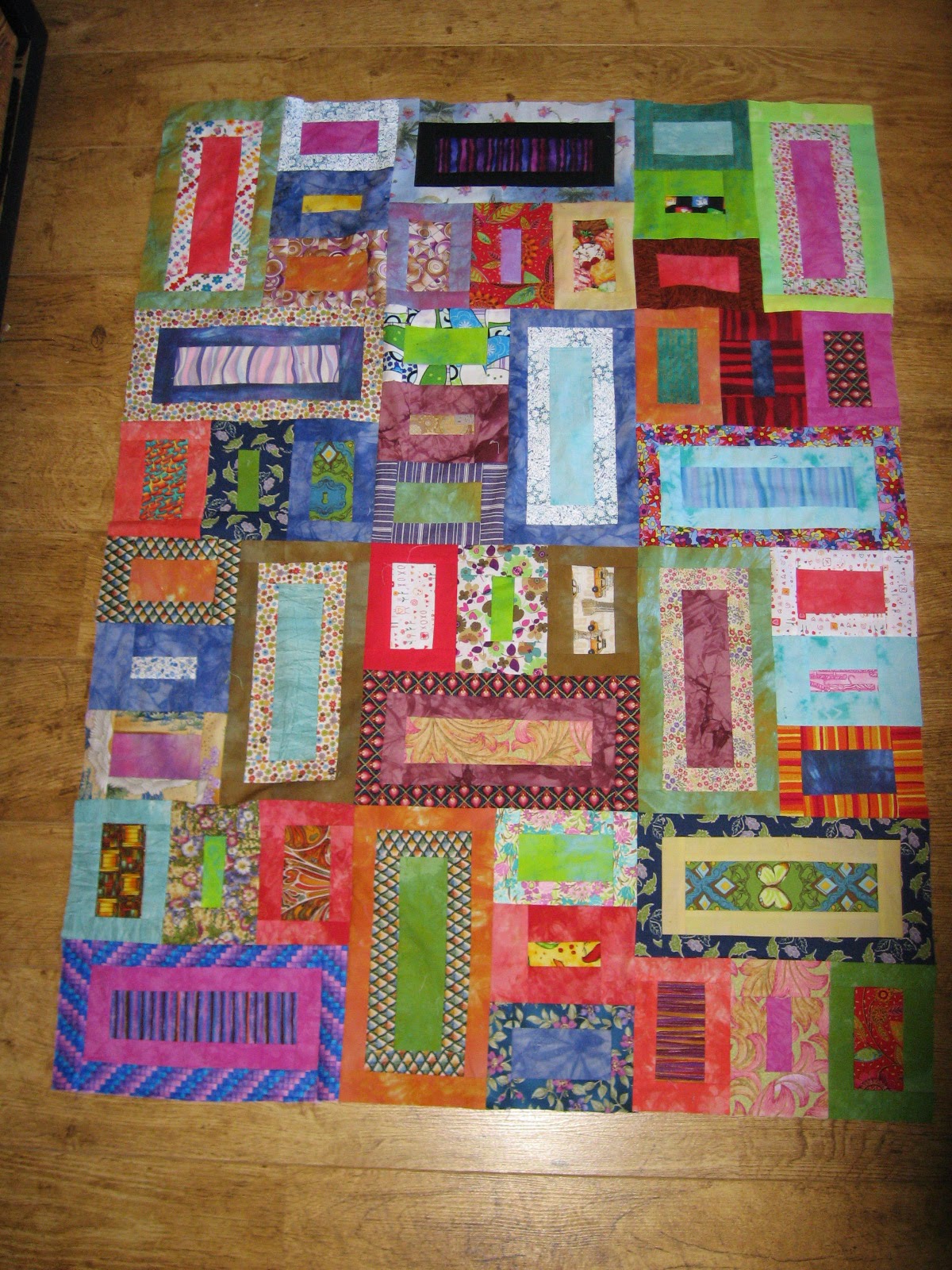 Scrappy Dreams (38x46"). October 2014, using the Peaches & Dreams pattern by Judy Laquidara, but in all scraps rather than monotone, as usual... 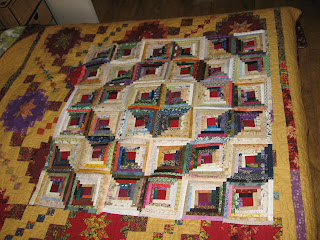 Tiny Scrappy Log Cabin 42x42". May 2013.  This was made with 1" strips from my scrap basket- totally scrappy, just using red centres and lights and darks on opposing sides of the block. It served as my leaders and enders project for some time. I do enjoy playing around with log cabin settings, and I had just the right number of blocks for this one. 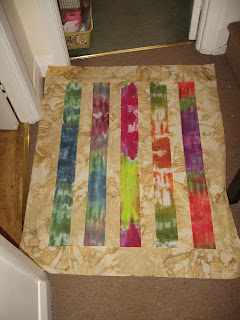 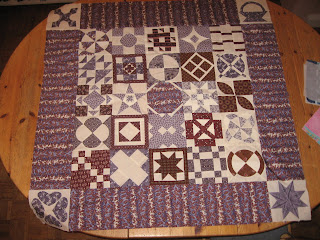 Dear Jane Wallhanging. 42x42". (April 2010) This is another fairly recent one - although my friend Cathi and I started swapping these 6" DJ blocks a while back (August 2007), we only finished fairly recently, so there's no guilt about the blocks hanging around for any length of time. Yet! 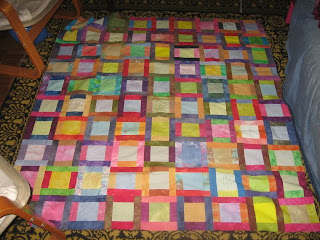 Framed Hand-dyed squares. 56x62. November 2009. These blocks are from a swap with my dyeing group in 2005. I know this because each swapper signed and dated one of the blocks (I can't remember how many we sent in total) - not sure if that's a handy reminder or a terrible nag, at this stage... 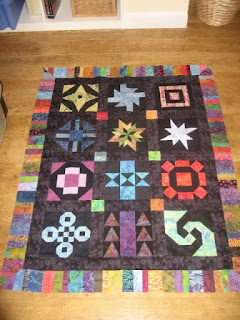 Batik quilt. 44x56". These blocks originally came from yet another block swap - we swapped 3x18" blocks and a number (can't remember how many) of 9" blocks - some of which I know I gave away for whatever reason. Anyway, these blocks were put into a top in November 09, but I'm sure the blocks had been hanging around for several years before that. 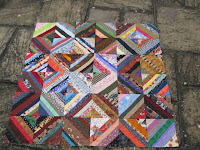 Scrappy string quilt. 46x46. These string blocks were from several sources - both a swap and my own stash. I had loads of them, and some of them I made into a quilt for Cathi, and some I sent to LisaJo. I don't know when the swap was that I took part in, but the top was finished in  March 2009. Of course, the quilt I made for Cathi was back in August 2006, so some of the blocks have been around for a while! 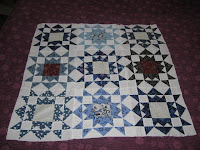 Christmas table topper. 36" square. These blocks are a few from a swap of Christmas blocks of this design which I did with Scrap Quilting Forum - most of the blocks I got were red & green and I decided a while ago I didn't want them, but I kept the blue ones to make a table topper. Don't really know which Christmas the swap was originally intended for (ok, I checked, the swap was in summer 2006 and the top was assembled in June 2008) but it's been far too long and I should really get it sorted. 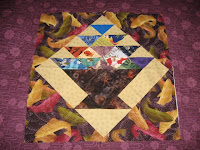 Basket mini quilt: 22" square. (nb: backing pieced).  I won the basket blocks from the block lotto in May 2007 and have used a number of them as mini quilts for various occasions - a couple of quilt angel situations, a blog giveaway and so on. This one I intend to keep for myself, so I used for the setting fabrics a fish fabric which I love and don't have much more of.  This is the smallest UFO I have and as such, shouldn't really be that hard to finish. But it's just one of those things. 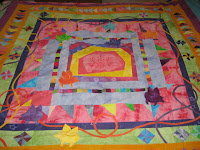 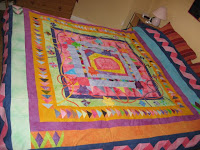 "Flying Pigs". 82" square. Oct 2005-Oct 2006. A  Nesting Round Robin (where you add a different border or row each month, depending on instructions, only you keep the piece yourself rather than send it around to others to work on). This one was on the Scrap Quilting Forum on Delphi. Each month a different one of the players gave an instruction as to the type or style of border. I made my quilt entirely in hand-dyed fabrics - most of them mine, a few from swaps with others. On the right is the whole quilt - or as much of it as I am able to show indoors on my bed - the twisted ribbon border is the outer border. On the left is a little more detail of the central part. If you want to see the whole thing from centre to complete top, I have an set of photos in my flickr album. Once again, this originally wasn't quilted because I didn't feel my quilting skills lived up to it. And I didn't know what I want to do with it. I'm confident about my quilting skills now, but still have idea how to quilt it.