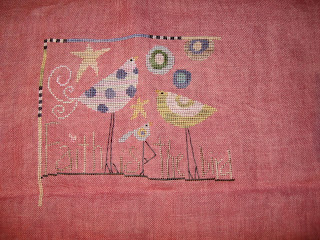 Amazing how different the piece looks in different light...  Anyway. I have now completed the first three sections of this - I am caught up to what I have received in the post.

Here's how it looked last week: 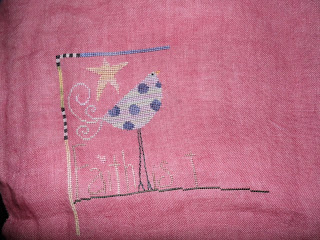 So you can see there was quite a lot of work done on it - nice to be able to say that about something in my life!

However, I'm now going to put it away for a few weeks (even if I do get another installment of the pattern) while I work on seasonal stuff. I have started one seasonal piece (or rather, picked up where I left off last year, in February, when I tired of winter) - one which just says "winter" and isn't Christmassy, particularly, so I will carry on with that one until it's done. Probably.

I'm nearly finished with the triptych of birds I've been working on (probably only two evenings, possibly even one if I have a long block of stitch time), so I'm going to finish that before I pull out the other seasonal cross-stitch (yes, for those of you who follow this blog regularly, I am talking about my Christmas Nemesis, the Angels).  What I should do before I start on them this year is check to make sure I have all the reds I need before I start.  Maybe I will do that later this week, and really get organised.

I don't expect to finish it this year (there's still a lot of stitching to come) but it would be nice to make some progress, I think.  Of course, who knows what I would do if I ever actually finished them!  I do have several other Christmas patterns knocking about though, so I'm sure I'd find something to fill the space and time...
Posted by Kate North at 10:30 pm 2 comments:

Labels: cross stitch and embroidery, faith is the bird 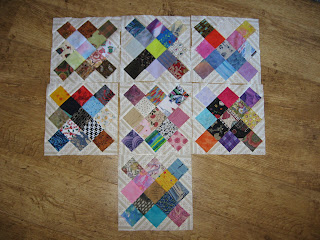 I'm not getting a huge amount of sewing time, with one thing and another, but I did get a chance to make another granny square or two. I am now up to 7. I think I set aside enough unique squares for about 16, which will make a nice, small baby quilt. Eventually. 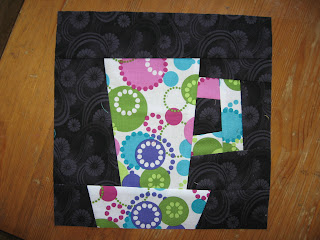 One more coffee cup for the block lotto this month - I had hoped to do a few more, but I ran out of black on black and also of time.  These are fun, though - I might do some more in a different colourway - I like the dark backgrounds, but I might use some of my not-strictly-BOB fabrics to make some for myself. 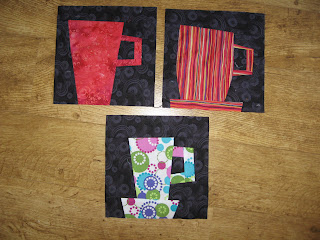 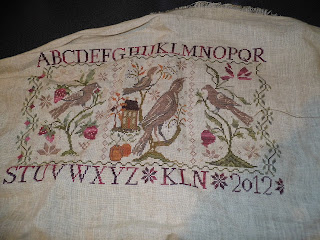 Making good progress on the third section of this design, although as it happens, I ran out of one of the greens and will have to order more. I only need about 12 inches more, I reckon.  Oh well! 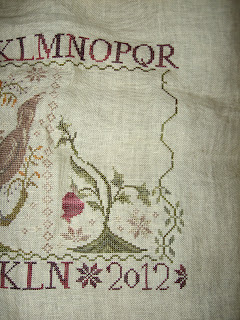 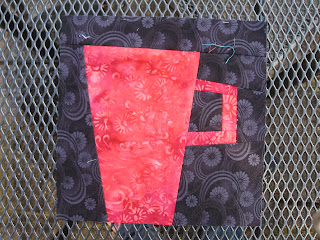 Over on the block lotto this month, we're doing free-form coffee cups (with some specifications). They don't have to be red, mine just happen to both be. I hope to have time to do a few more before the end of the month as I really like them. 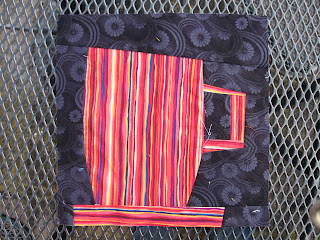 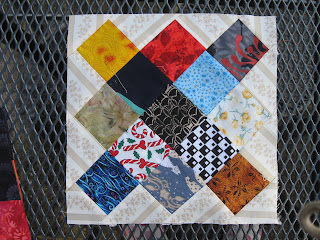 Lots of people seem to be making granny squares at the moment, so I couldn't resist. I'm trying to use up scraps, though, so there's no theme to mine, just scrappy scrappy scrappy. 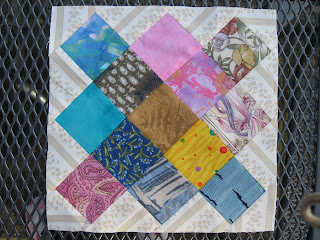 This is a nice fast stitching project - which is good, as it has twelve parts to it.  I finished the first part and have moved on to the second, though I haven't got far with that - just the branch and "is t".  But it will come! 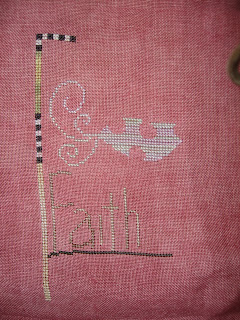 Labels: cross stitch and embroidery, faith is the bird 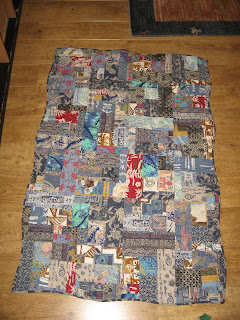 I know I haven't finished a lot of things recently - or indeed, worked on a lot of things - but here's one thing I have actually done - quilted and bound this little Hawaiian shirt lap quilt, which is soon off to a new home, but I shan't say where... 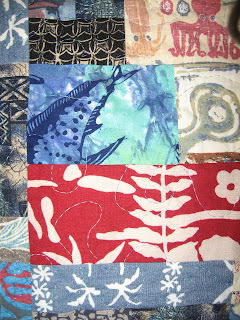 Not been doing a lot of stitching recently, either cross-stitch or other sewing, but I did manage to make a little progress on the cross-stitch. A few more weeks before I get the seasonal ones out (early December, I think - I usually carry on with them until mid- to late January). 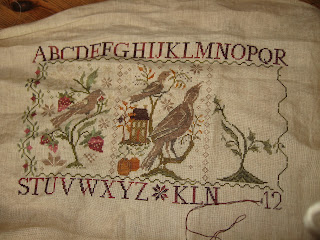