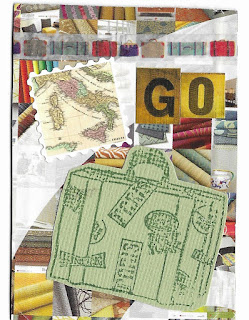 And another set of round robins where I was the central player. 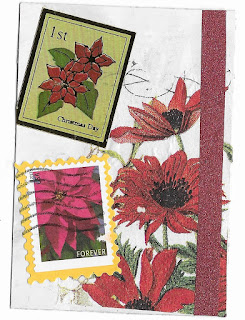 Posted by Kate North at 9:51 pm No comments: 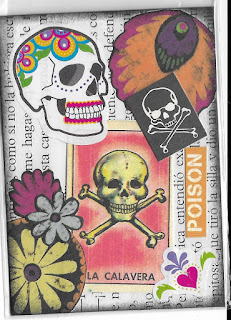 A couple of round robin cards where I was the second player - the middle one. Someone starts the card, sends it to a second person, who adds something and then sends it to someone else to be finished. These are fun to show because they have all three stages - the other cards I don't always see all the stages to (though sometimes I do see them in the forum I trade with). 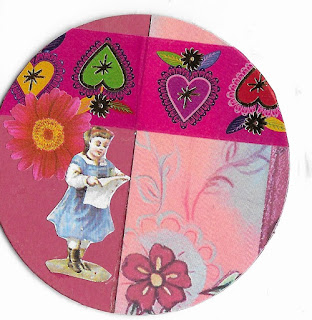 Posted by Kate North at 9:49 pm No comments: Not the best photo - the border fabric is a strong reddish orangeish brown.  Too sunny for much contrast, I guess.

Posted by Kate North at 9:45 pm No comments: 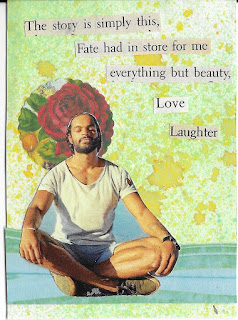 Another "trash" themed swap - here, the trash was accompanied by some text pages, and you had to use at least three of the items of trash per card, and also make some found poetry from the text pages. 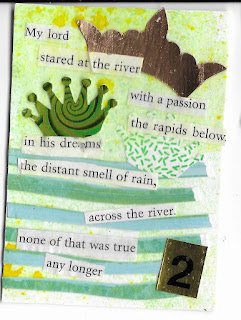 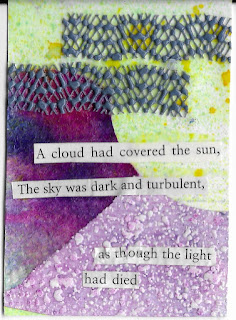 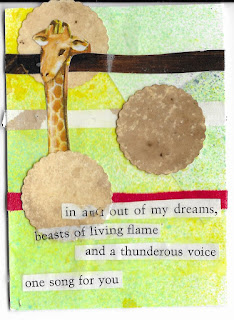 Posted by Kate North at 8:08 pm No comments: 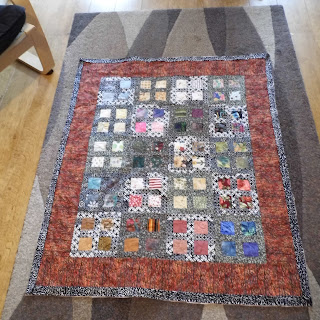 This was a top which had been hanging around for a while. My mother's neighbour in the US recentyl had a baby, so I thought I'd make a quilt as a gift - they kind of keep an eye on her a bit, which is really nice of them. 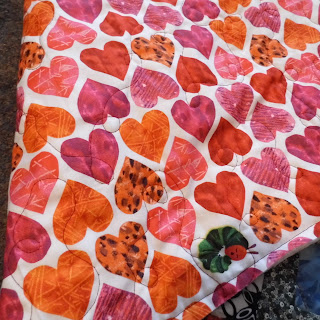 Luckily, I have my quilt group this week, so I should be able to get the binding stitched down.

Posted by Kate North at 9:43 pm No comments: 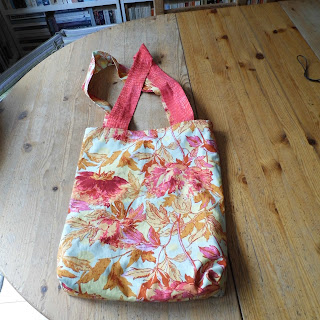 A quick present for Michelle, the teacher I work with - it was her fabric, which we were talking about a while back - she was going to use it for something else, but I didn't think the large design would work for that, so I suggested a tote bag - the labout on it was my gift (I did line it as well, in something different - what the handle is made from. There wasn't enough of the Kaffe Fassett fabric for the handle, too...)

Posted by Kate North at 8:22 pm No comments:

Labels: bags, gifts for others 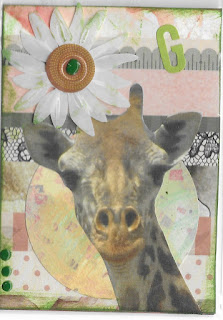 Three sets of cards which I started and then two other people worked on. I really like this giraffe - fun! 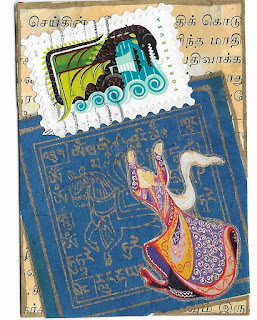 Posted by Kate North at 8:16 pm No comments:

Three sets of round robin cards I finished up - I was the third person to add something.

Posted by Kate North at 8:12 pm No comments: 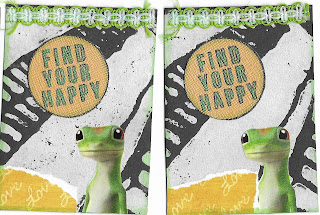 Three sets of round robin cards which I started and then two other people added to. 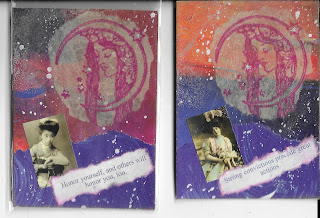 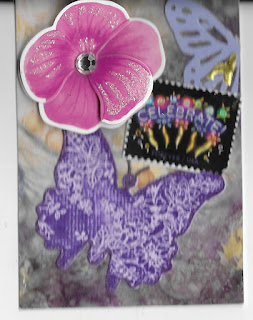 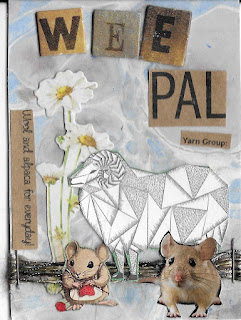 These cards were for a different kind of swap than I've done before - similar to the "trash" swaps, where someone sends you some items and you have to use them. But this time, all the players sent in three sets of five bits of "trash" to the hostess, who then sent them out to other. You had to use all of the trash (or part of all of it) on the card you made for the person, who then got a card back made with their own "trash". It was fun, though a little challenging.  Here, I got two letters, a paper sleeve from a ball of yarn, a little image of a mouse, the flowers and the yarn.  The other stuff, I added from my stash. 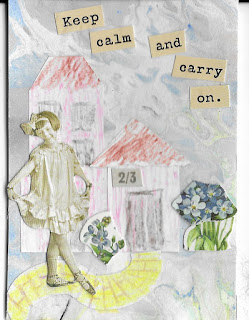 This one I actually used the back of some of the items sent (this was allowed within the rules). I got the image of the girl, the flowers were from a bigger image, the 2/3 was from a piece of scrap paper sent, and the other two things were made from backs of other items - I can't remember what the fronts were - but the path was a thick black sticker - maybe a figure 8? 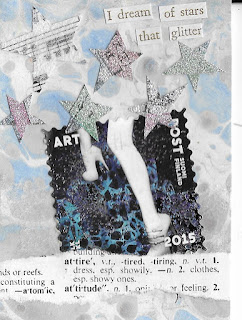 This one was easier - the stamp was one of the items, and it was great. Also, a dictionary page, some glittery paper, a bit of music paper and a bit of sheer fabric you can't really see in the photo (which coevers the music paper star). 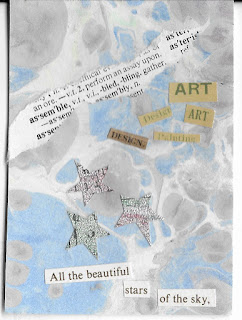 This was a card made for the hostess, using leftover bits and pieces from the trash I received.

Posted by Kate North at 8:03 pm No comments: 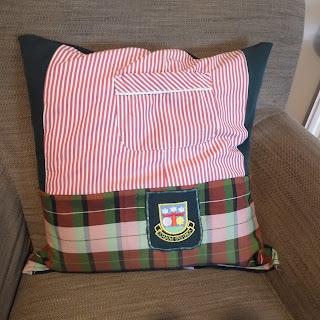 One of the few bits of sewing I've done lately is this cushion, made from bits and pieces of old school uniform. It's for the daughter of a friend, who is heading to university in the autumn. I managed to use both primary and secondary uniform, include a badge and a pocket, and even incorporate a bit of PE kit. It will be a fun memento to take to uni with her... 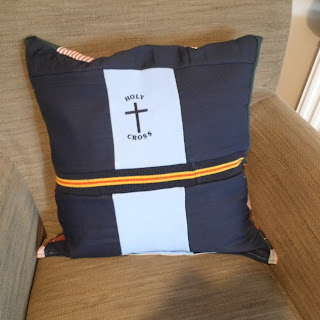 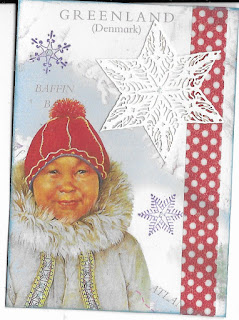 Two sets of round robin cards where I was the second (middle) player - someone else starts them and someone else finishes them. It's sometimes hard to be the middle player, if the card has quite large images on it to start with - you want to add something, but also to keep space for the last person. 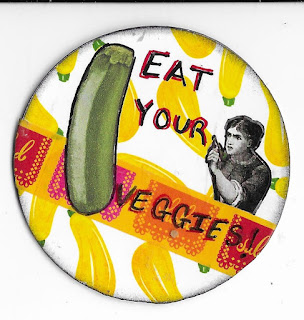 And you never quite know where any given card is going to go...

Posted by Kate North at 7:57 pm No comments: