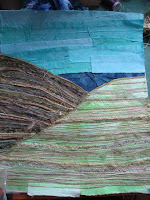 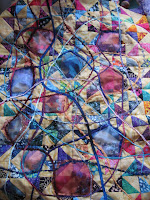 We had a busy day today, but as I decided not to be a lazy bum, I got up when Alex came into bed (7.45) and put the telly on for him, then did a bit of sewing. As I knew I'd not have too long, and didn't want to get the ironing board out, I worked on these two pieces - the one on the right is fairly recent - my piece for quiltswap 4. I think I have now put as many yarns on it as I am going to - next step is to put in backing and batting and do some quilting on it. And then maybe some embellishments of some sort. We'll see what it says at that point.

The piece on the right is in plain sight whenever I work, so it's still fresh in my mind, but I haven't worked on it in ages, so you guys might not recognise it. Today I added lots more light green. The sky will also be covered in yarns, but the sea will be beaded. It's going to be a 40th birthday present for my friend Sophie (no, not that Sophie - sorry chick) - her birthday is in October, so I thought I should probably get my act in gear and actually do some work on it.

That was all I did today, but I did get tons of post and other goodies, so here goes:

From Sophie I got this great parcel (the other Sophie this time!) with the basket blocks that I won in the May Block Lotto on about (there are actually 13, but if I had a place I could display 13 x 16" blocks in my house - well - can you say "design wall"?). I also got two oriental lantern blocks from that swap, which she forgot to send me (this is not a problem as I am not ready to put these blocks together by any means) before and some black scraps for my pieced sashing project. Which I might someday finish :) 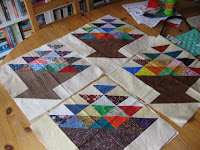 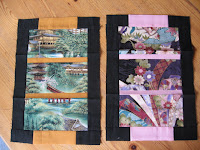 I also got this great postcard from Lynda which doesn't really show much in the photo but is the most amazingly textured thing - I really like it. Must get some cheesecloth or scrim and work with it... And Sarah got her postcard for the kids' exchange from Dylan in New Zealand. She was very pleased, as was I as she will now stop asking me when it will arrive. Of course Olivia is desperate to get hers now... 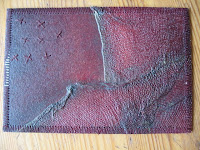 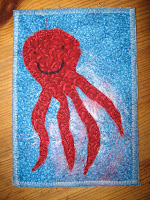 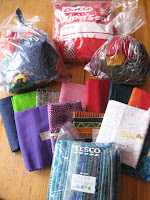 And finally - treasure! The QGBI Region 2 was having a quilter's sale in Mickleham Village Hall, which is right down the road from our all-time favourite family picnic spot. And the weather was good today. So in a spirit of serendipity, we decided to tootle along for a picnic - Geoff and Alex dropped me and the girls in the village and drove on to the carpark and walked up to Juniper Top; the girls and I scooped up some bargains, then walked along to join them.

And there were bargains galore - it was kind of like a table top sale or jumble sale (only tidier), but for quilting stuff - there was one shop trader there, but the others were individuals or roving shops or similar (only about 6 or 7 vendors) trying to get rid of stuff and make some money doing it. I got all the stuff on the left, plus the bags below for the girls (including a 1/2 metre piece Sarah stuffed in her bag), plus a piece of fabric for Alex which has wandered off somewhere before being photographed - ALL for about £25. There were a lot of £1 FQs, but there were also lots of stuff cheaper than that. The smaller grab-bags were 50p each or 5 for £2. (We got 5, of course.) I sorted through my grab-bags and there were some things in there that will go straight to Olivia, but also lots of nice smallish pieces which will be good for postcards or birthday swap blocks. And the Tesco baggie in the front of my stuff was great - lots of small pieces in various blues for £2 - what a bargain! 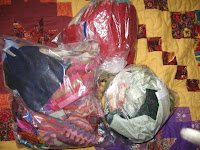 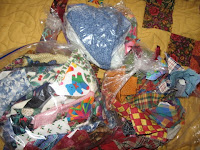 £25 for a piece of fabric for Alex? I hope that is a typo. Loved all the loot - you lucky duck!

I've just found you via two or three other blogs. I have just spent half an hour really enjoying your postings.
I will return soon, but must get some dinner ready or I will be in trouble!
Cheers for now,
Jenny

£25 for everything, KA, not for just Alex's piece :) Edited the blog entry to clarify that!

I guess I shouldn't leave comments if I can't read properly LOL.

Lots of lovely goodies from your trip - you've got to love other people's scraps!! Like the scrappy basket blocks too :)

Hi Kate, I've been reading your posts from the top down - you have been having lots of creative fun and a great shopping trip *!*

Hi!
Gosh! I love bargains too! Your certainly got a good ones!
Susan