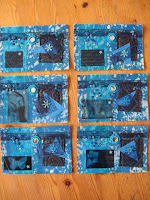 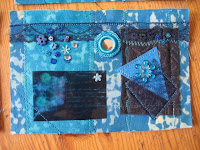 Finally, a day to get some work done. (Which is good as there is no post to show due to a postal strike - not that I would necessarily have got post, but...) First thing I did was to edge the lantern postcards (photo below) so they could go in the post, but that was a matter of moments, and what I mainly did was to work on a series of Blue cards for that swap, and some sheer technique pieces for a swap with my surface embellishment group (use sheer fabric in any way).

Above are the blue cards. I thought about taking photos at each stage of the process to show the creation of a card series, but in the end, I decided not to. I will, however, walk you through the process of these cards - so you might want to skip the next couple of paragraphs :)

Basically, what I do when I make cards to a colour or other vague theme is to get out everything I have which fits the theme. Discovery: I have even more blue stuff than I thought. There were several funky things I didn't use at all (no angelina, for instance, and I have some funky blue woven stuff I used a small piece of on the washer cards, and I didn't use that. Or blue sequin punch. Or a ribbon of blue sequins. And I barely used any beads, and didn't use the blue silk (not real silk, I'm sure) flowers I have. Or feathers. Or...) Even so, there's a lot of blue stuff.

Once I have all the stuff laid out on the table, I make a background (blue hand-dyed fabric background to start - this piece is from a roller-painting swap with my dyeing group. Not sure who made the piece of fabric, but it was great for these cards) then begin layering things on it, not fastened down to start. Once I get the first thing or two, the rest tends to fall into place, but sometimes it's hard to start.

In this instance, I started with the right hand side - a piece of embossed felt. Over top of that, I used a triangle of funky paper (almost plastic in texture) and a piece of blue sizeflor (whatever that is - it's what it says on the packet). It took a while to get to this stage, but once I was there, I took them away, and attached them with stitching, both plain and decorative. Then I added a piece of sheer blue organza on the left hand side (zigzagged down) and the blue lace across the top, which I only attached at the top, leaving the bottom free to be tacked down in various places later.

Next came the transparencies (from Artchix), which are attached in a corner with a blue flower shaped brad and in the other corner with stitching, and the shisha mirrors, which are stitched down. And then some embellishments - the buttons, sequins and little piece of lapis lazuli are all stitched down (with beads to hold in place where necessary); the snowflakes and jewels are attached with strong glue.

The last step will be to put a backing on and do the edges - in this case, a light blue of some sort for the backing, and possibly blue eyelash yarn around the edge; if that looks too busy, blue variegated thread satin stitched around. And there you have it - a series of postcards. 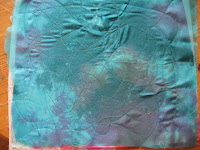 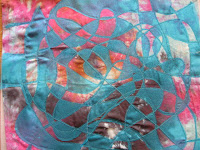 And here's some more stuff I did, without going into so much detail! This piece is for the sheers swap with my surface embellishment group - I took a piece of pelmet vilene (stiff interfacing) laid on a piece of hand-dyed fabric (parfait style) and covered with sheer fabric, then I stitched all over it more or less randomly in big swoopy lines which cross and re-cross one another. Then, I removed sections of the sheer using my soldering iron, to leave places where the fabric shows through and places where it is covered with the organza. Later, I sliced it into sections for the swap, but it looks nice - I am going to do some postcards using this technique later this summer.

I also did two other things with sheer fabric - one is snippets of sheers on top of (synthetic) felt with a layer of sheer on top, then used the soldering iron to cut them apart (it seals the cuts at the same time); the other was to make little parcels of snippets of yarns inside a bit of organza. Again, sealed with the soldering iron - I was having a good play with it today. And there are the lantern postcards all finished up (I forgot to take a photo of the ones I posted today - there were four more, for a total of ten). 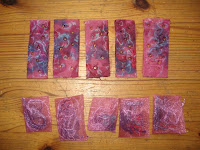 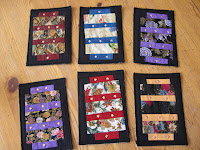