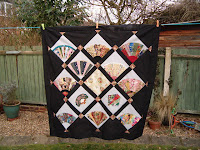 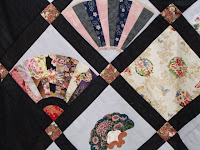 Two posts in one day! But I thought I'd share some photos of the quilt tops I have taken to Lana for her to quilt on her longarm - I have resolved to try to get some of my many tops quilted, so here's my start. The fans, we still aren't quite sure what we're going to do with - she's going to have a think about it. The other top, the Heirloom Delft Swap top I happen to know is on her machine right now and it's having Baptist Fans in a pale blue (it's on the machine now because when I took it to her, she was coincidentally working on a top using Baptist Fans in a pale blue, so it was much simpler to just carry on with my top now). Which is exciting, as I'll have it back later this week. Talk about quick service! 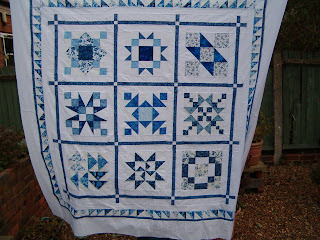 It must have been a bit windy out when I photographed this one as I promise, it really is square! I've enterred this one to the quilt show at Hever (not a competitive show, it's the regional show of Region 2 of the Quilter's Guild of the British Isles, held every September in the grounds of Hever Castle, Kent). As it's not a competitive show, it's no problem that the blocks originally came from a swap or that it was longarm quilted by someone other than myself... When I made this quilt, I commented that I probably used more white in this quilt than it all the other quilts I have ever made, combined!
Posted by Kate North at 8:29 pm

Love your blue & white quilt - looks very cool and summery. Never been to the show in Hever - is it worth the trip???