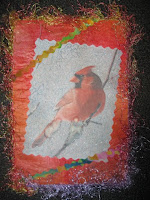 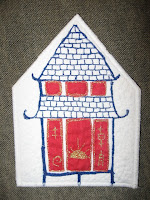 Well, as I can't show what I worked on today (round two of the Exquisite Corpse, finished - I wish I could show it, I'm really having a good time with it!), it's a good thing I have things received and things bought to show...

First, things received. The first is a very belated postcard from winning the December pc lottery on Arts in the Mail - I don't mind it being late, though, as I really like the card and am glad to get it. Cardinals are one of the things I miss from when I lived in the DC area - we don't have them here. The second is my March house front, this one from Pam, who has done "House from the Land of the Rising Sun", a clever interpretation of my theme (House of the Rising Sun). It's a great house, made mostly from stitch - the three large red panels are actually only stitched to the house at top and bottom, so they add a lot of texture. It's a lovely bit of thread painting, and I'm delighted to have it. 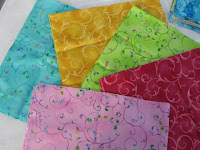 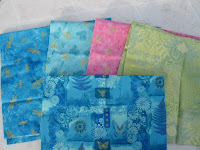 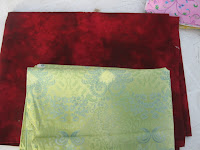 And now, things bought. Two sets of possible colourways for the commissioned piece - I have a feeling she will go with the one on the left, but you never know. I like both sets of fabric, so will be happy to have whichever bits aren't needed added to general stash. Once I know which fabrics I'll be using (and who knows, she might dislike both of these options) I'll work out what sort of pattern I want to go with.
The other fabric is fabric for binding the pineapple quilt (it's not quite as pink as it looks - it's more a deep red) and some of the green fabric with blue metallic accents which is in the lighter colour palette above - there wasn't much left on the bolt, so I thought I better buy it, just in case. You know how it is!

I, too, love cardinals and we only have one once in a long while show up around here.

The colours in your new stash is gorgeous.