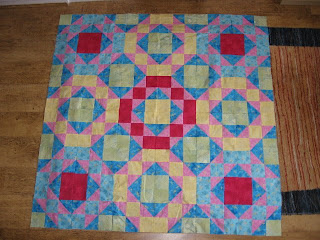 As I mentioned, I wanted to get the top together today; I did. I will put the border on it at some point later this week (I hope) or early in the Easter Holidays. I want to get it quilted during the holidays - shouldn't be a problem really, as it's not that big and we don't have a huge number of things planned. Yet. Yesterday someone commented that they liked the red in the quilt - the photo doesn't show it well, but it's actually a strong pink rather than a red. I think this photo shows the colour a bit truer than yesterday's. 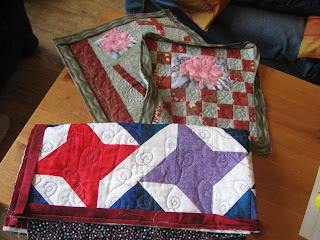 Another thing I did was to put some binding on quilts in order to be able to do them this week in the evening watching telly. I also put some binding on Olivia's little bear quilt, but she had taken that away somewhere, so it didn't get into the photo. I'll try to do that one first - it's only about A4 size, so it won't take long. 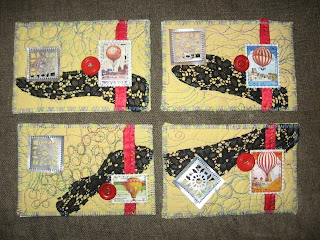 And I finished up the recycled postcards - they will go out in the post later this week. The background is made from a Brownie's t-shirt which I had used to demonstrate free motion quilting and let Olivia practice; the black lace is from an old bra; the metal is from a diet coke can; the red ribbon is from a bag of chocolates we got for Christmas (two, actually); the stamps are self-explanatory and the buttons came from clothing. For the backings, I have used paper which is not recycled, but which was leftover from another project, so that's close, at least!
Posted by Kate North at 10:16 pm