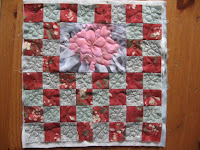 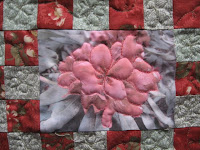 Two things done today - the March challenge for BQL, and a related piece, using another printed photograph but different style blocks. The March challenge, as you can see, featured a printed (onto fabric) photograph and a chequerboard of squares - I was pleased with how this little piece (12" square) came out - obviously it needs some binding, which I will get to soon, and I think I will go back and quilt around the edges of the photo to make it a little less puffy. 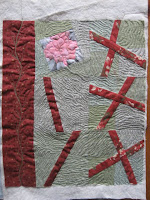 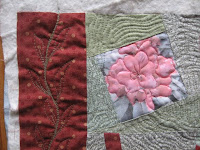 The other thing I did, I like even more - I've been wanting to play with the strip insertion technique as featured in Quilter's Playtime and other places - in fact, I've been wanting to for a long time, ever since I received a quilt from Julie in the Miniature Booty Swap (first round) which used the technique. Lately, I seem to keep seeing it everywhere, so it's been on my mental list. I had a second fabric photograph (first one was too small for the challenge quilt), so I decided to combine it with the insertion technique and this is the result - more or less. I kind of made parts of it up as I went along, I admit. Once it was assembled, it looked unbalanced, so I added the red strip down the side and then quilted it really heavily so that the strips would pop out. The red strip has a vine with leaves quilted into it rather than heavy quilting. Obviously, I have to bind this as well, but I'm looking forward to hanging it up somewhere and enjoying it.

Don't you just love Quilter's Playtime? So many great ideas. I love what you've done with it.

Your quilting looks amazing. I love that focused detailed look on those small pieces.

Oooh - pretty!Of course it was only after I finished piecing mine that I realised it would be interesting to change the orientation ...

Lovely -- I am inspired!