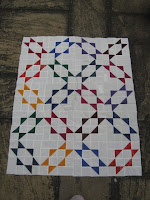 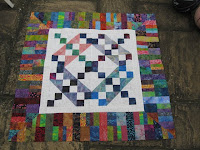 Well, I did finally get a chance to work today, though as I am still feeling a bit run down with this cold, I didn't want to do anything which was too challenging, so once again I reached for the boxes of miscellaneous blocks which needed putting together. First order of business, 20 8" batik stretched stars, which I've had knocking around for far too long. Despite being swap blocks, I only lost points on one of these, which was nice. As it will no doubt be another baby quilt, I don't suppose the lost points will be all that serious, though it does annoy me slightly. The other thing I did was to use the 4 12" Batik Jacob's Ladder blocks which I saved from a large stack of swapped blocks. I put these together to form a central panel and then added some borders from batik scrap blocks. I decided that with the strong diagonal of the centre, this piece really needed mitred borders, and although the batik rectangles don't meet in the corners, it definitely looks better mitred than not. So, two more for the pile of baby quilt tops. I don't think I'll be caught out unawares for a while! (None of them are quilted, of course, but I can quilt a baby quilt in a few hours, no problem.)

Looks like a trip to the fabric store might be in order tomorrow (one of my locals is open on Sundays, the other - bigger one, unfortunately - isn't) as I have a new commission to work on. This piece is being commissioned by the woman I made the diamond quilt for as a birthday gift for her future DIL and is going to be a large lap-size quilt. Not sure quite what fabrics I will choose, though Angela has given me some idea of the DIL's taste. I'm going to go hunting for a few different palette options and work from there. Should be fun - and hopefully it will fit easily into my schedule. If I have enough energy tomorrow I shall work on the main thing on my schedule - the Exquisite Corpse piece - I haven't wanted to tackle it yet as I haven't really felt like my brain has been working 100 per cent. Better today, though, so perhaps tomorrow is the day. Oh, and I must remember to look for binding fabric for my pineapple quilt if I'm actually in the fabric store - it would be nice to tick that off the list.
Posted by Kate North at 11:22 pm

I ike the layout of the stretched stars. I just might have to copy that if you don't mind. Very pretty quilts.

2 more fabulous quilts - I really like the layout of the stretched stars.

These are beautiful! Thanks so much for posting them!