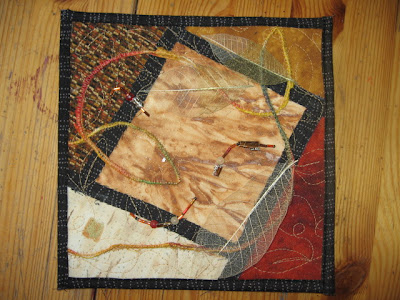 This week's quiltlet uses some fabric which I received as a birthday present, as well as some rust-dyed fabric I received as part of a challenge. The piece served the dual purpose of journal quilt and challenge project. Because it's only a journal quiltlet, the pieces are fused before being free-motion quilted, rather than being stitched down. I quilted some leaves into the piece to emphasise the autumnal feeling of both the piece and the weather.

Texture was added to the piece using "silk scrunchies" which are something funky I picked up from The Thread Studio at the Knit and Stitch Show - I couched some of these down,  making a few bends to emulate leaf shapes. Then, more leaves - some skeleton leaves, plain and some which I had which were half gold.  I have just stitched down the spine, so they actually flap up a little, which gives the piece some texture as well. And then, beading. Anna had included some funky aluminium beads she made, and coincidentally I got some wire and beads in the right colours as part of a little inspiration pack from my friend Lana on my birthday, so I beaded some wires and threaded them in and out of the two pieces. Finished the edges with some black, sprayed the whole thing with some Moon Shadow Mist, just to add a little hint of gold.